Weekend Chillout - Up in Smoke

To celebrate Jamie Dimon's synthetic CDS portfolio bursting into flames, this weekend's chillout is dedicated to all the banksters blowing smoke.

What the heck, if the Silver Teddies can make a come back so can Phone Man.

Why should I buy Silver?

I thought with the partial downfall of JP Morgan I would bring out my cartoon from 2010 from the vault.

I am so loving this unfolding story. I think this is the first time I have ever heard the arrogant prick Jamie Dimon ever admit to a mistake. As reported on this blog on April 17 JP Morgan's "London Whale" was beached and stuck in his trades. Well it seems a few weeks, even in the British sunlight, have resulted in him rotting and the stench has gotten so bad that even Jamie has had to acknowledge that his hedge does stink.

Barely four years after Wall Street's wrong-way bets plunged the world into a financial crisis, JPMorgan Chase & Co. admitted it lost $2 billion from a trading portfolio that was supposed to have helped the bank manage credit risk.

"These were egregious mistakes," said Chief Executive Jamie Dimon, who is considered one of the world's savviest bankers. "We have egg on our face, and we deserve any criticism we get."

The announcement stunned the financial industry, in part because it came from such a highly regarded bank. Dimon had navigated JPMorgan through the crisis in good shape by clamping down on some of the excessive risks that torpedoed rivals.

Dimon told analysts that the bank racked up $2 billion in trading losses during the last six weeks, and that could "easily get worse." He said JPMorgan could suffer an additional $1-billion loss from the portfolio during the second quarter.

"My jaw is on the table," said Nancy Bush of SNL Financial. "I never expected this right now — not in a million years."

The losses stemmed from derivative bets that backfired in the company's Chief Investment Office. This part of the bank was in charge of trading to balance the company's assets and liabilities, although it had been criticized by some analysts for operating more like a hedge fund.

There had been media reports that a single JPMorgan trader in Europe, known in the bond market as "the London whale," was making massive bets that were influencing prices in the $10-trillion market.

Investors bailed out of JPMorgan stock in after-hours trading, a sign it will open sharply lower in New York on Friday. The stock fell 6%, and rivals such as Citigroup Inc., Wells Fargo & Co., andBank of America Corp. also posted modest declines. 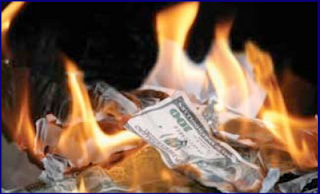 A month ago we warned that JPM's CIO office is nothing short of the world's largest prop trading desk. Not only were we right, but what just transpired is just shy of our worst possible prediction. At the end of the day, the real question is why did JPM put in so much money at risk in a prop trade because we can dispense with the bullshit that his was a hedge, right? Simple: because it knew with 100% certainty that if things turn out very, very badly, that the taxpayer, via the Fed, would come to its rescue. Luckily, things turned out only 80% bad. Although it is not over yet: if credit spreads soar, assuming at $200 million DV01, and a 100 bps move, JPM could suffer a $20 billion loss when all is said and done. But hey: at least "net" is not "gross" and we know, just know, that the SEC will get involved and make sure something like this never happens again.

As for what we said before, we will just repost the whole thing as we were, once again, right.
From April13: Why JPM's "Chief Investment Office" Is The World's Largest Prop Trading Desk: Fact And Fiction

Read more
Posted by Unknown at 5:16 PM No comments:

JPMORGAN Chase, the largest bank in the US, says it lost $US2 billion ($A2 billion) in a trading portfolio designed to hedge against risks the company takes with its own money.

The company's stock plunged more than six per cent in late electronic trading on Thursday after the loss was announced.

Other bank stocks, including Citigroup and Bank of America suffered heavy losses as well.

"The portfolio has proved to be riskier, more volatile and less effective as an economic hedge than we thought," CEO Jamie Dimon told reporters. "There were many errors, sloppiness and bad judgment."

Dimon spoke in a hastily scheduled conference call with stock analysts. Reporters were allowed to listen.

Partly because of the $US2 billion trading loss, JPMorgan said it expects a loss of $US800 million this quarter for a segment of its business known as corporate and private equity. It had planned on a profit for the segment of $US200 million.

JPMorgan is trying to unload the portfolio in a "responsible" manner, Dimon said, to minimise the cost to its shareholders.

Among other bank stocks, Citigroup was down 3.2 per cent in after-hours trading, Morgan Stanley was down 2.9 per cent, and Goldman Sachs was down 2.7 per cent.

Keiser Report: I Steal, Therefore I Am