The European Central Bank took the ultimate policy leap on Thursday, launching a government bond-buying programme which will pump hundreds of billions in new money into a sagging euro zone economy.

The ECB said it would purchase sovereign debt from this March until the end of September 2016, despite opposition from Germany's Bundesbank and concerns in Berlin that it could allow spendthrift countries to slacken economic reforms.

Together with existing schemes to buy private debt and funnel hundreds of billions of euros in cheap loans to banks, the new quantitative easing programme will release 60 billion euros ($84.5 billion) a month into the economy, ECB President Mario Draghi said.

By September next year, more than 1 trillion euros will have been created under quantitative easing, the ECB's last remaining major policy option for reviving economic growth and warding off deflation. The flood of money impressed markets: the euro fell more than two U.S. cents to $1.14108 on the announcement, and European shares hit seven-year highs.

Gold rose less than 1% for the trading day but with large intraday swings in London and New York trading hours.

We can all see clearly now why the Swiss de-pegged the Franc from the Euro last week, it was bad enough to bail on a falling Euro but a Euro that is being set on fire..... 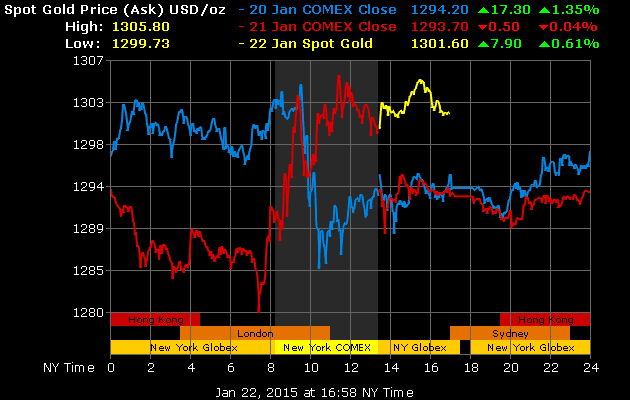 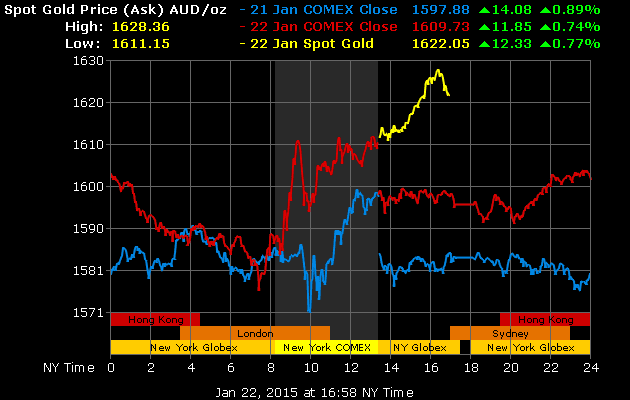