The Australian dollar looks set to be classified as an official reserve currency by the International Monetary Fund, in a sign of the dollar's rising importance on global money markets.

With heavy buying by foreign central banks thought to have supported the Aussie dollar in recent months, the fund is considering whether to add it and the Canadian dollar to its list of official reserve currencies.

Today, only the US dollar, euro, pound, yen and Swiss Franc are classified as official reserve currencies – those held in large quantities by foreign governments.

But buried in a statistical report published late last week, the fund said it was considering publishing data on the official reserve holdings of Australian and Canadian dollars because of the growing foreign interest in these currencies.

The global head of interest rates strategy at Westpac, Russell Jones, said the IMF's move was recognition of the growing importance of the dollar for global investors.

"Over recent years, the Australian and Canadian economies have proved more stable and their financial sectors more robust than the more traditional safehavens of the US, the eurozone, Japan, the UK and Switzerland," Mr Jones said.

Gold’s 12-year rally, the longest in at least nine decades, is poised to continue in 2013 as central bank stimulus spurs investors from John Paulson to George Soros to accumulate the highest combined bullion holdings ever.

The metal will rise every quarter next year and average $1,925 an ounce in the final three months, or 12 percent more than now, according to the median of 16 analyst estimates compiled by Bloomberg. Paulson & Co. has a $3.62 billion bet through the SPDR Gold Trust (GLD), the biggest gold-backed exchange- traded product, and Soros Fund Management LLC increased its holdings by 49 percent in the third quarter, U.S. Securities and Exchange Commission filings show.

Central banks from Europe to China are pledging more steps to boost growth, raising concern about inflation and currency devaluation. Investors bought 247 metric tons through ETPs this year, exceeding annual U.S. mine output. While both sides said talks Nov. 16 between President Barack Obama and Congress over the so-called fiscal cliff were “constructive,” the Congressional Budget Office has warned the U.S. risks a recession if spending cuts and tax rises aren’t resolved.

“We see gold as a hedge against the follies of politicians,” said Michael Mullaney, who helps manage $9.5 billion of assets as chief investment officer at Fiduciary Trust in Boston. “It’s a good time to garner some protection in portfolios by having some real asset like gold.”


Read more
Posted by Unknown at 3:54 PM No comments:

As the Gaza - Israel conflict continues into another week it seems the precious metals markets are starting to factor in a protracted campaign. Also analysts are looking at this conflict as a precursor to a possible future attack on Iran by removing one of the retaliatory threats to Israel. 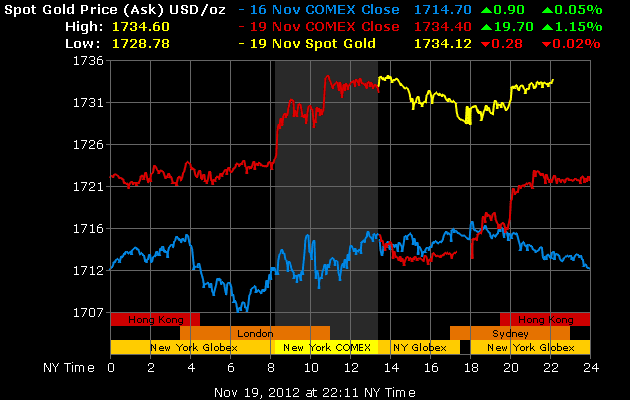 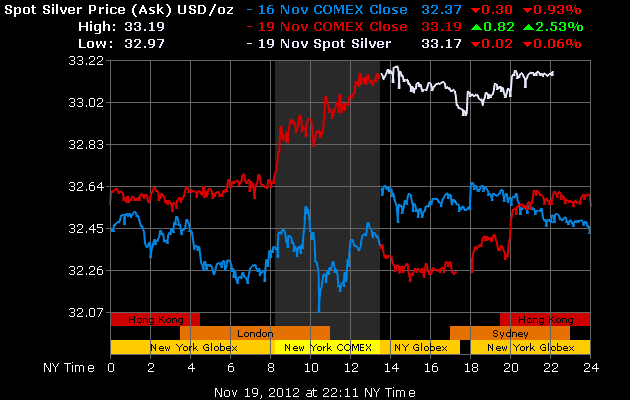 Just days before Thanksgiving, the US Senate was planning on taking a vote on the National Defense Authorization Act, but there has been a slight delay. Senator Rand Paul of Kentucky has proposed an amendment halting the vote. In it, Paul reaffirms the sixth amendment guaranteeing a fair a speedy trial to all Americans which has been threatened by the NDAA. 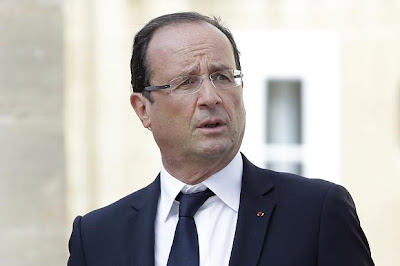 So much for hoping for a socialist president to save them......

Today's rating action follows Moody's decision on 23 July 2012 to change to negative the outlooks on the Aaa ratings of Germany, Luxembourg and the Netherlands. At the time, Moody's also announced that it would assess France's Aaa sovereign rating and its outlook, which had been changed to negative on 13 February 2012, to determine the impact of the elevated risk of a Greek exit from the euro area, the growing likelihood of collective support for other euro area sovereigns and stalled economic growth. Today's rating action concludes this assessment.

1.) France's long-term economic growth outlook is negatively affected by multiple structural challenges, including its gradual, sustained loss of competitiveness and the long-standing rigidities of its labour, goods and service markets.

2.) France's fiscal outlook is uncertain as a result of its deteriorating economic prospects, both in the short term due to subdued domestic and external demand, and in the longer term due to the structural rigidities noted above.

3.) The predictability of France's resilience to future euro area shocks is diminishing in view of the rising risks to economic growth, fiscal performance and cost of funding. France's exposure to peripheral Europe through its trade linkages and its banking system is disproportionately large, and its contingent obligations to support other euro area members have been increasing. Moreover, unlike other non-euro area sovereigns that carry similarly high ratings, France does not have access to a national central bank for the financing of its debt in the event of a market disruption.

An Infographic for my US readers from againstcronycapitalism.org Graphic link

Former British Prime Minister Tony Blair said that he is frustrated by by the mounting death toll in Gaza as well as the continued rocket shelling in Israel.

In an interview with Al Jazeera, the Quartet special envoy said he supports Egypt's effort to help broker a ceasefire between Hamas and the Israeli government.

Gerald Celente - Trends In The News

Posted by Unknown at 9:44 AM No comments:

Israel's Iron Dome comes into action as rockets fired from Gaza are intercepted.

Posted by Unknown at 7:06 AM No comments: