Michael Ratner: Pres. Obama debating rules that allow him to kill extra-judicially anyone considered an enemy combatant anywhere in the world including US citizens and by logical extension, within the United States.

In this edition of the show Max interviews Greg Hunter from usawatchdog.com. He talks about the post US election economic statistics including the latest jobs and manufacturing numbers. Greg is the producer and creator of Greg Hunter's USAWatchdog.com

Labels: On the Edge

A recent report from Chinese The Ministry of Industry and Information Technology (MIIT) on the Chinese Gold industry. Larger font text sections are my emphasis.

Industrial and information technology departments of the provinces, autonomous regions, municipalities directly under the Central Government, the industry associations, the central enterprises:

Gold is a special product of the dual attributes of both commodities and currency, and has an irreplaceable role in the response to the financial crisis, safeguard national economic security. In order to guide the healthy development of the gold industry, and promote the orderly development of gold resources, improve resource utilization levels to promote gold and industrial restructuring, accelerate the the gold industrial transformation and upgrading, formulated guidance.

After years of development, China's gold industry has formed a relatively complete industrial system of geological prospecting, mining, beneficiation, smelting, processing and scientific research, the industry has laid a good foundation for the gold industry bigger and stronger.

Gold production grew steadily. China's gold output reached 361 tons in 2011, of which 302 tons of gold mine production gold colored byproduct of 59 tons, the total output, compared with 2005, the average annual growth rate of 8.3%, for the fifth consecutive year ranking first in the world. Meanwhile, China is the gold jewelry and other products processing superpower and processing production accounts for about 60% of the world.

China's gold demand is growing rapidly. In recent years, gold to hedge against inflation and financial risks is increasingly apparent, are growing holdings of gold reserves in many countries the folk interest in holding physical gold has continued to improve, adding gold in the international financial system and monetary system reform factors. In 2011, China's gold investment and consumption showed a strong growth momentum, jewelry, gold bars, gold coins, industrial and other gold reached 761 tons, ranking second in the world after India. In the next few years, the basic pattern of the gold in short supply in China will also exist.

4. Constantly optimize the industrial structure. Through the integration of resources, as well as mergers and reorganizations, the number of gold mining companies decreased from 1,211 in 2003 to about 700 in 2011, 51% of the gold production of the top 10 companies of the industry-wide, higher than in 2005 by 20 percentage points, industry concentration has improved significantly. At the same time, the product structure, the deep-processing products for the electronic, aerospace, petrochemical, automotive and other fields has begun to take shape.

6 green mine construction success. Through technological progress and to increase investment in environmental protection, as well as the implementation of the system of the mine geological environment governance restore the margin, "three wastes" emissions compliance rate of the gold industry, the ecological environment in mining repair rate has gradually increased, large mining cyanide wastewater, industrial wastewater and domestic wastewater to achieve recycling. The first batch of 37 national green mines pilot units, gold accounted for 6.

(B) the presence of

Comprehensive utilization of resources is low. Enterprises are small, and the low level of technology, every production of 1 ton of gold consumed an average of 1.7 tons reserves, large-scale mines an average of 1.5 tons, and small mines up to two tons or more, serious waste of resources.

"During the 12th Five-Year" is the gold industry to accelerate the transformation of development mode, to strong critical period, China's gold industry is facing rare opportunities for development, is also facing some difficulties.

(A) gold financial property further show the strategic position has been consolidated. Since the outbreak of the international financial crisis in 2008 and the current debt crisis in Europe, the countries in the world to re-recognize that gold has an important role in any credit money can not be replaced. The profound impact of the international financial crisis continue to spread, hindered the recovery of the global economy, increased uncertainties and destabilizing factors, the world competing to increase its gold reserves from the national economic and strategic perspective, in order to protect their own financial security. In 2010, net purchases by central banks from 20 consecutive years of the gold net sales becomes.

(B) the demand for gold continues to grow, a huge space for industrial development. With gold hedging and liquidity, increasing the value of properties enhanced consumer demand, China's gold consumption in 2015 is expected to exceed 1000 tons, but only gold production is expected to reach 450 tons, to further expand the supply gap.

President Mohamed Morsi has withdrawn the controversial decree expanding his powers but insists that the referendum on the draft constitution will go ahead. Al Jazeera's Sherine Tadros reports from Cairo. 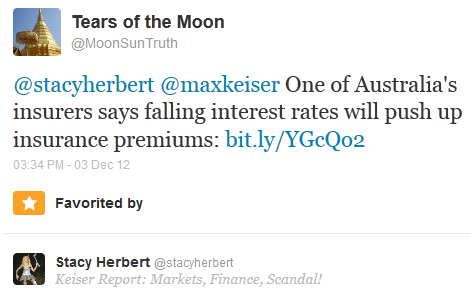 Published on Dec 8, 2012 In this episode, Max Keiser and Stacy Herbert look at how Hollywood accounting has turned the global financial system into one in which money and wealth melt like so much congealed snow. And so from Pontiac, Michigan to the Australian outback, zero percent interest rates and jobs that never materialize are the new normal. In the second half, Max Keiser talks to Matt Taibbi of Rolling Stone magazine about banksters who can't recall a single thing about their crimes, including everything from Libor rigging to defrauding monoline insurers.