Published on Jun 20, 2013
In this episode of the Keiser Report, Max Keiser and Stacy Herbert discuss the recent visitation to the Keiser Report from a UFO with aliens on board wishing not to speak to Doughball Dave Cameron, but to discuss their concerns about the Giant Debt Ball of China which can be seen from outer space. They take an in depth look at the size, scale and speed of debt in China and at the JP Morgan Debit Card Work Farm for employees at McDonald's in Pennsylvannia.

In the second half, Max talks to Australian economist Steve Keen, author of Debunking Economics, about George Osborne's ponzi-like Help to Buy scheme being similar to failed government housing schemes in Australia in which Help to Sell is the true objective of the subsidies.

Where to begin. In a bizzaro day in which Uncle Ben hinted that he might easy off on the accelerator, but not even think of dabbing the brake markets and FX has gone crazy. This day has shown that all world markets, even precious metals markets are addicted to cheap money, and it is not even suggested we break the habit, only just inject a little less liquidity. A crack addict could handle this withdrawal better than these markets.

The latest in the market gyrations has been Gold breaking through $1300 and Silver thru $20, although both have since recovered sightly above these levels. It will be interesting to see what happens at the NY Comex open coming up right now. 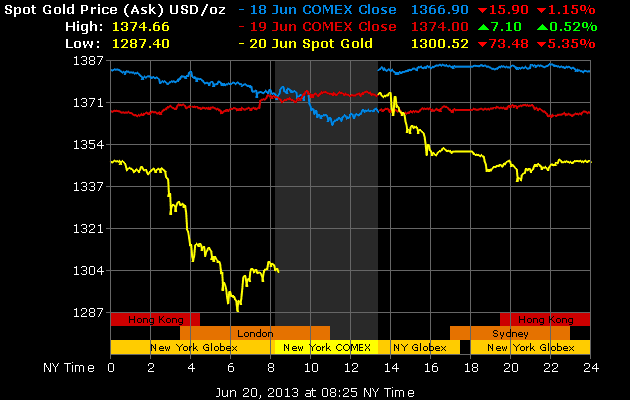 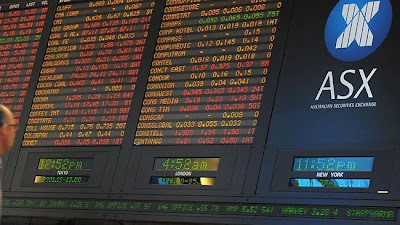 Australian shares had their worst day in more than a year, caught up in a global rout after investors were spooked by the US Federal Reserve’s clearest signal yet for a possible end to its multitrillion-dollar stimulus program.

The global rout started on Wall Street after Fed chairman Ben Bernanke outlined the roadmap for a potential pull-back if the economy improved as expected, indicating that the Fed could start winding back its $US85 billion-a-month cash stimulus program as early as September.

That triggered a big sell-off of US equities, a movement into bonds, a stronger US dollar and weaker Australian dollar, which makes holding Australian equities less attractive to foreign investors.
Advertisement

‘‘Rather than anything with logic, people have been throwing out the baby with the bathwater,’’ said RBS Morgans senior trader Luke McElwaine.

Read more: http://www.smh.com.au/business/markets/shares-crash-in-global-rout-20130620-2ojwl.html#ixzz2WkxIHmHD
Posted by Unknown at 9:54 PM No comments: