Robert has made me into a Platinum Bug 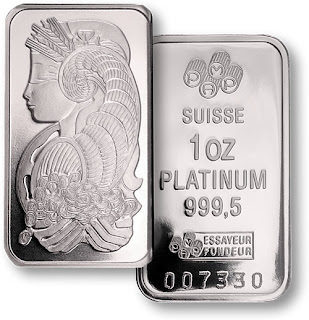 Finally after years of prompting President Robert Mugabe has finally convinced me to become a Platinum Bug. Yes I know for years I have preached the undervalued nature of silver and how it will most likely give you the best bang for your buck long term, I still believe that. But as one of my favourite clients once said "...but I do have a diversified portfolio, I have both Gold and Silver" - a little diversification is a good thing.

What has finally made me make my first personal platinum purchase is the following story, which was discussed in part in this previous post.

Background: Zimbabwe accounts for 10% of the world's platinum supply, but more importantly has the second largest platinum reserves in the world after South Africa. South Africa's platinum mine grades have been in free fall of recent years and if the world is going to use platinum into the future the reserves in Zimbabwe will need to be exploited. Although as any good Australian knows the last thing a mining company likes is government interference, even a minor change in tax law can have them in a flap - threaten their mining leases and they will exit Zimbabwe quicker than the thinking white people did when Robert came to power.

President Robert Mugabe’s government plans to seize control of foreign-owned mines without paying for them as part of a program to accumulate $7 billion of assets following his July 31 election victory, a minister said.

The government will compensate bank owners as it takes control of their companies, Saviour Kasukuwere, the minister in charge of the program to compel foreign companies to cede 51 percent of their assets to black investors or the government, said in an interview in Harare, the capital, today. His comments echo a suggestion made by Mugabe earlier this year.

Indiginization Minister Saviour Kasukuwere said the government does plan to compensate bank owners as it takes control of their companies.

“When it comes to natural resources, Zimbabwe will not pay for her resources,” Kasukuwere said. “If they don’t want to follow the law that’s their problem.” Non-compliant mine owners risk losing their licenses, he said.

Anglo American Platinum Ltd. (AMS), Impala Platinum Holdings Ltd. (IMP), Barclays Plc (BARC) and Standard Chartered Plc (STAN) are among companies that operate in the country. Other industries may have to yield smaller stakes to black owners, Kasukuwere said. Metals and minerals, including platinum and gold, accounted for 71 percent, or $719.9 million, in exports in the first four months of this year, the state-controlled Herald newspaper said, citing the finance ministry.

Anglo American Platinum, the world’s biggest producer of the metal, Impala and Aquarius Platinum Ltd. (AQP), which owns a stake in a Zimbabwe mine, declined to comment.

Shares of Impala, Aquarius and Anglo American Platinum fell 2.7 percent, 3 percent and 1.1 percent respectively by the close of trade in Johannesburg. Barclays Bank of Zimbabwe Ltd. declined 20 percent on the bourse in Harare.

The government and black Zimbabweans will take half of the value of assets it has identified in the economy, he said. The state empowerment fund has so far acquired about $1 billion in assets, he said.

The government will open a new stock exchange to trade the black-owned stakes in the companies, he said. Trading at the Harare Stock Exchange, which would rival the Zimbabwe Stock Exchange, may start within 100 days of the new government taking office and will only be open to black Zimbabweans, he said.

~ I am going to get off topic here for a sec. A stock exchange only open to black Zimbabweans? So white and Asian Zimbabweans are barred from participating? Gee isn't that what Apartheid was? Where are the sanctions, the bleeding heart Hollywood actors, sporting bans on their cricket team? Oh sorry I forgot, only white people are racist.

Read more
Posted by Unknown at 7:50 PM No comments:

In this episode of the Keiser Report, Max Keiser and Stacy Herbert discuss the strawmen of finance, the Help to Buy straw purchase scheme in the UK and the 'unrealized' losses on the Fed's balance sheet as the bondpocalypse gallops into town. Max Keiser also asks, "why don't the people have a bank that they can call their own?" In the second half, Max talks to Laura Willoughby of MoveYourMoney.org.uk, about moving your savings out of the Too Big To Fail banks and about out-competing the toxic banks and their interest rate apartheid.