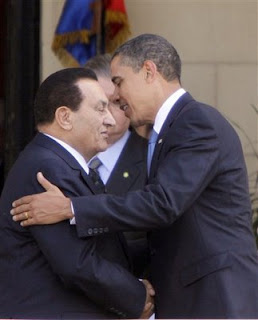 By Robert Fisk
The Independent:

The Egyptian tanks, the delirious protesters sitting atop them, the flags, the 40,000 protesters weeping and crying and cheering in Freedom Square and praying around them, the Muslim Brotherhood official sitting amid the tank passengers. Should this be compared to the liberation of Bucharest? Climbing on to an American-made battle tank myself, I could only remember those wonderful films of the liberation of Paris. A few hundred metres away, Hosni Mubarak's black-uniformed security police were still firing at demonstrators near the interior ministry. It was a wild, historical victory celebration, Mubarak's own tanks freeing his capital from his own dictatorship.

In the pantomime world of Mubarak himself – and of Barack Obama and Hillary Clinton in Washington – the man who still claims to be president of Egypt swore in the most preposterous choice of vice-president in an attempt to soften the fury of the protesters – Omar Suleiman, Egypt's chief negotiator with Israel and his senior intelligence officer, a 75-year-old with years of visits to Tel Aviv and Jerusalem and four heart attacks to his credit. How this elderly apparatchik might be expected to deal with the anger and joy of liberation of 80 million Egyptians is beyond imagination. When I told the demonstrators on the tank around me the news of Suleiman's appointment, they burst into laughter.

Their crews, in battledress and smiling and in some cases clapping their hands, made no attempt to wipe off the graffiti that the crowds had spray-painted on their tanks. "Mubarak Out – Get Out", and "Your regime is over, Mubarak" have now been plastered on almost every Egyptian tank on the streets of Cairo. On one of the tanks circling Freedom Square was a senior member of the Muslim Brotherhood, Mohamed Beltagi. Earlier, I had walked beside a convoy of tanks near the suburb of Garden City as crowds scrambled on to the machines to hand oranges to the crews, applauding them as Egyptian patriots. However crazed Mubarak's choice of vice-president and his gradual appointment of a powerless new government of cronies, the streets of Cairo proved what the United States and EU leaders have simply failed to grasp. It is over........read on
Posted by Unknown at 12:45 PM No comments: