Mike Maloney - The US Dollar WILL Collapse!

GoldSilver.com's Mike Maloney chats with Cambridge House Live's Bridgitte Anderson about gold, silver and why he believes the US dollar will collapse.

'Fear not, till Birnam wood Do come to Dunsinane'

Posted by Unknown at 7:49 PM No comments:

Peter Schiff - We have a big economic crisis coming

Famous finance commentator Peter Schiff chats with Bridgitte Anderson at Cambridge House Live during the Vancouver Resource Investment Conference 2014. Topics covered include QE, the US dollar and how to prepare for what Mr. Schiff believes is coming.

Bill Murphy, the chairman of the Gold Anti-Trust Action Committee, chats with Cambridge House Live's Bridgitte Anderson about the recent news that Germany is taking a serious look at potential criminal activities in the gold market.

Ukraine government ready to resign as protests spread across country


Published on Jan 23, 2014
Rioting has spread to the west of the country - with protesters sieging and breaking into administration buildings. Meanwhile in Kiev, the opposition and the government are now expected to announce the results of their talks. Let's get the latest from RT's Peter Oliver, who is there in the capital.

Gold spikes on calls for easing of Indian import restrictions

Gold spiked 2% overnight on some technical reversals but more importantly on the back of news out of India that Congress party chief Sonia Gandhi has called for a review of India's import restrictions on gold. 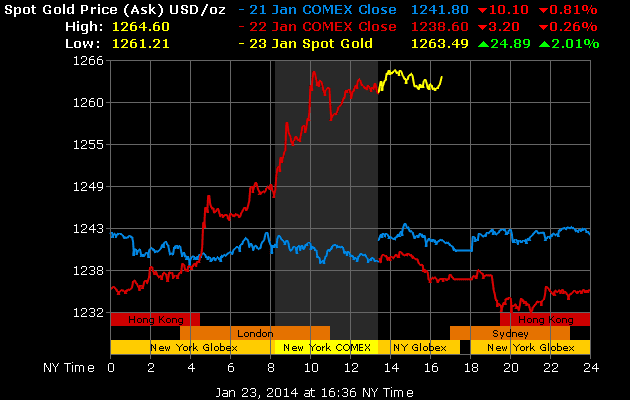 Congress party chief Sonia Gandhi has asked the government to review tough import restrictions on gold, which include a record 10 percent import duty, a television channel and a news website said on Thursday.

Her intervention is likely to create pressure for an easing of rules that have hammered the bullion industry and brought a surge in smuggling, but the finance minister said the curbs would not be rolled back anytime soon.

India used to be the world's biggest buyer of bullion until the government and central bank stepped in last year with import curbs aimed at reducing a record current-account deficit.

Read more
Posted by Unknown at 8:48 AM No comments:

In this January Matterhorn Interview , Jim Rickards talks to German investigative journalist Last Schall. Jim is the author of bestseller Currency Wars and soon to be released sequel The Death of Money. The brilliant economist, lawyer and entrepreneur Jim Rickards is again at his best in this podcast as he discusses the failure of the Fed, as well as the Fed's suppression of gold. He explains why gold must rise to at least $7,000 - $10,000. Rickards also discusses China's gold purchases and that the people with the most gold will have the most say in regard to a new monetary system.

In this episode of the Keiser Report, Max Keiser and Stacy Herbert discuss the fact that a vassal state of the Troika has been listed as number 9 in terms of economic freedom by the Heritage Foundation and Wall Street Journal. With that, they ask what is economic freedom in a neo-liberal, hyper-contractualized and financialized world run by big business, big banks and big bureaucrats. In the second half, Max interviews Payu Harris and his attempt to bring Bitcoin and other cryptocurrencies to the Pine Ridge Indian Reservation in South Dakota. Payu suggests cryptos and the blockchain can offer unbreakable, sacrosanct contracts.