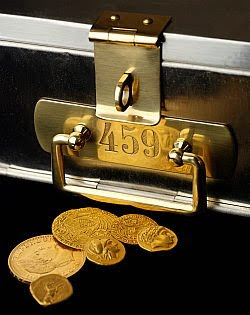 Europeans trying to protect their wealth from global economic uncertainty have been stashing bank cash and gold bullion coins and bars in safety deposit boxes and depositories in Switzerland.

The euro zone debt crisis and fear that ultra loose monetary policy by central banks will stoke inflation have sent investors in search of extra security according to Reuters.

With central banks around the world flooding markets with liquidity, some people fear spiralling inflation. People are turning to assets that will keep their value if prices rise.

“So much money has been pumped into the system that people are worried about inflation down the road”, said Bruno S. Frey, professor of economics at the University of Zurich. “You counter that by buying real assets of material value”.

Gold is an increasingly attractive option.

An Italian businessman was recently caught trying to smuggle gold bars into Switzerland under his car seat.

Further evidence of rising interest in gold is seen in the fact that due to the increased flow of gold bullion into Switzerland, the respected depository, Via Mat International is currently adding capacity in their storage facility in Zurich airport.

Private-banking clients in Switzerland and Austria are holding wealth in less risky assets as confidence in the financial system and the ability of advisers to secure investment returns remains low, according to a study by LGT Group and Johannes Kepler University which was reported on by Bloomberg.

“The majority of private-banking clients remain risk-averse”, Vaduz, Liechtenstein-based bank LGT Group and Linz, Austria-based Kepler University said in a joint report. “The high level of risk awareness and loss of confidence are reflected in the high cash share of portfolios”.

In Switzerland, 77 percent of investors described themselves as “risk averse” or “risk neutral”, compared with 78 percent in Austria.

More than half of those surveyed said confidence in the financial system had been “severely dented”, while 22 percent expect the euro region to “collapse”, a scenario that prompted Austrians in particular to ditch their home-currency holdings in favor of Swiss francs and some are also turning to gold bullion.

European clients including German, Austrian and Swiss clients have definitely been adding to allocations in recent weeks as the debt crisis contagion risk rose again.

Counting the Cost - Is Mongolia over-reliant on its resources?

Aquarius Platinum puts Everest South mine on care and maintenance 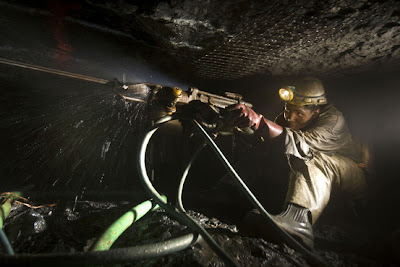 AQUARIUS Platinum’s woes deepened on Thursday when it suspended its Everest South mine in South Africa, leaving it just two operating mines and tailings treatment operations to generate revenue.

When Aquarius recently put its money-losing Marikana mine on care and maintenance, there was speculation that the Everest South mine, which has had operational difficulties and is also not making money, would be suspended too.

Shares in Aquarius fell nearly 9% to R7,25 on the JSE, making it the leading decliner, after it released the news of the suspension of Everest.

The South African platinum sector has sounded strong warnings this year that it is facing serious difficulties, with above-inflation wage and electricity increases, stagnant platinum prices and disruptions to mining operations due to government-led safety stoppages.

Anglo American Platinum, the world’s largest platinum producer, is reviewing its business to restore profit margins, and the result of that work will be made available towards the end of this year.

Eastern Platinum has suspended stoping, or dedicated reef mining, at its Crocodile River Mine near Brits and has opted to focus on development work, some of it on reef. It has also suspended a big expansion project near Steelpoort, Limpopo, because of the state of the market.

Aquarius said Everest would be placed on care and maintenance from June 21.

"The ramp-up at Everest has encountered challenges resulting from poor ground conditions and ongoing disruptive industrial relations over an extended period and these issues, coupled with the present low platinum group metals price environment, have rendered the mine uneconomic," Aquarius said.
Posted by Unknown at 9:51 PM No comments:

"The platinum market is expected to be in a substantial deficit this year and palladium could fall into a deficit, due to lower South African and Russian output," CPM forecast Tuesday in its CPM Group Platinum Group Metals Yearbook 2012.

"Rhodium's surplus is expected to decline in 2012, similar to platinum and palladium, mostly due to a decline in mine production in South Africa, the largest producer of PGMs," said the New York City-based commodities consultants.

"In 2012 supply is forecast to fall as virtually no new PGM production capacity is added to annual supply and labor strikes earlier this year halted production for extended periods," CPM predicted.

Platinum fabrication demand is projected to rise 3.5% this year to around 7,617,992 ounces, the strongest growth since 2006, says the yearbook. "This is because a large component of fabrication is highly price sensitive."

Jewelry demand, which comprises 25% of total platinum demand, is expected to benefit from lower platinum prices this year, increasing 2.4%.

Auto demand is also expected to rise at a strong pace, mostly due to a strong recovery in demand from Japan. Monthly double-digit sales are expected to boost platinum auto demand by 20% in 2012, according to PGM.

Jewelry demand for platinum rose to 1.9 million ounces in 2011 for a 2% increase. China is now the biggest consumer of platinum jewelry with roughly 75% of jewelry demand coming from the country last year.

"Jewelry demand is expected to benefit from weaker prices in 2012," CPM said. "Demand from this source is projected to rise 2.4% this year to an estimated 2 million ounces."

Demand for platinum coins appeared relatively strong last year in 2011, said CPM. Total platinum coinage is estimated to be 36,847 ounces in 2011. "Coinage could soften in 2012," said the yearbook.

Annual refined platinum supply rose for the second consecutive year by 3.5% to 7.4 million ounces in 2011. The majority of the increase came from increased mining production, which accounted for 86.6% of total supply in 2011.

CPM expects total platinum supply to fall 1.6% this year to 7.3 million ounces. "Lower mine production in South Africa and Russia is expected to weigh heavily on supply. Secondary supply also is expected to fall due to lower scrap sales amid lower prices."

"The more relevant concern going forward is the lack of new projects coming onstream, which are needed to offset declines in output from mines where reserves are being depleted," said CPM, which estimates that annual PGM production capacity will increase from 14 million ounces in 2011 to 15.5 million ounces by 2016.

"From 2012 through 2015, only 680,000 ounces of PGM capacity will be added to annual production from near-term development projects."

Platinum prices average a record $1,722.39 last year, but still fell below gold prices for the first time since 2008.

Read on
Posted by Unknown at 9:41 PM No comments: 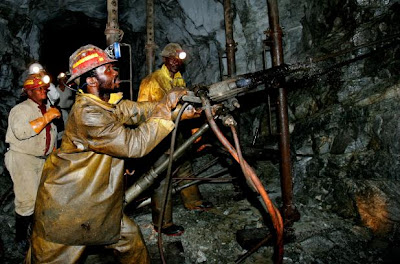 From The New Zimbabwe

ZIMBABWE is holding discussions with Russia for the supply of military helicopters in exchange for platinum deposits, a privately-owned Russian newspaper reported Wednesday.

The helicopters would be supplied by the state-owned Russian Technologies, Kommersant – a business daily – reported, quoting sources in the Russian Presidency.

“Russian Technologies has already secured preliminary support from Zimbabwe’s official representatives during its visit to the country in April,” a source told the paper, adding the Zimbabwean authorities were interested in the supply of Russian arms, in particular military helicopters.

“The issue being discussed is the transfer to Russian Technologies of the rights to develop the platinum deposits (at Darwendale) in exchange for the supply of helicopters,” the source said.

Darwendale is said to have proven platinum reserves of 19 tons and total resources of 755 tons taking into account other metals, such as palladium, gold, nickel and copper. Total capital investment in the deposit development from 2011-2055 is estimated at $2.8 billion.

Read on
Posted by Unknown at 9:04 PM No comments:

Platinum Bugs should hug a Commie

Mindful that this blog overwhelmingly focuses on Silver and Gold in the precious metal sector I though I would do a few posts on Platinum. With South Africa, Zimbabwe and Russia holding most of the world's mine supply of this critical metal, South Africa having 80% of the world's known reserves (source), the posts will focus on these countries in particular.

South African, ANC president Jacob Zuma has called for the party to shift gears as it heads to its national conference in Mangaung in December.

“After Mangaung we have got to change gears because our gears have been wobbling,” Zuma said to loud applause at the conclusion of the party's four-day policy conference in Midrand.

The conference had endorsed the need for a radical economic and transformation programme to dismantle the apartheid structure of the economy, he said.

Zuma's speech was delayed by apparent in-fighting among delegates.

Media were called to the Midrand venue to hear Zuma speak at 4.20pm on Friday.

By 5.40pm media were still being kept in a holding room and could hear shouting and whistling from the main hall.

A security guard was heard saying: "Kuyafiwa" – in Zulu, meaning "things are tense".

Media could hear a man shouting from the hall: "Order, order!" However, Zuma said members had behaved very well.

"Comrades, you have displayed exceptional conduct and restored the integrity of the organisation," he said to laughter, jeers, cheers and whistles.   Read on

The ANC has decided not to pursue the nationalisation of mines, national executive member Enoch Godongwana said.

"Nationalisation was discussed [at the conference], but it was not part of the mining section," he told reporters at the ANC policy conference in Midrand.

"It was discussed broadly as to whether we should retain nationalisation as an option or not. The greater consensus was that there should be a greater state intervention."

Godongwana said details on the proposal for a mining super-tax were not finalised at the conference.

"In principle, the proposal of using some form of... a tax instrument was agreed, but not that [super tax].

The policy discussion document proposed a 50% super-tax on profits exceeding about 15%. Such a tax could be expected to yield about R40 billion a year at current prices.

However, ANC members have agreed that state intervention in the minerals and mining sector is "urgently required", President Jacob Zuma said.

"[The] conference has agreed that the state intervention with the focus on... industrialisation is urgently required in the minerals sector," Zuma told African National Congress delegates at the close of the party's policy conference in Midrand, Johannesburg.

"At the forefront of this intervention should be strengthening of the recently created state mining company by consolidating state mining assets into a single institution."

Weekend Chillout - We are all slaves now

This week's chillout is inspired by CNBC finally admitting that we are all slaves to the central banks and their attendant rate rigging zombie banksters.

Conservative chancellor George Osborne gives a statement into the breaking scandal of Barclays Bank being fined for rigging the LIBOR interest rate with other banks. Other banks are to be revealed who are in on the scandal.