Wall St to pay for another 4 year lease for Barry 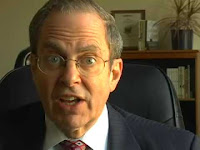 Dr. Stephen Leeb discusses the most recent report from Byron Wien (see extract of the report below) of Blackstone, a premier global investment and advisory firm. Listen to the KWN interview here

When the New Democracy party in Greece defeated the anti-bailout Syriza, I was anxious to learn what The Smartest Man in Europe thought of it all. The next day I flew across the Atlantic to meet him and we had a long discussion about the world financial outlook. Many of you remember The Smartest Man from earlier essays; I have been writing about him annually for more than a decade. He has been a friend for thirty years, and during that period he has shown an almost uncanny ability to see major events affecting the financial markets before other observers. Among these were the fall of Japan as an economic power in the 1980s, the economic changes in China and their significance the early 1990s, and the serious consequences of excessive borrowing in the developed world in the last decade.

His DNA endowed him with a certain amount of business acumen. His ancestors operated canteens along the Silk Road, selling food, weather protection and supplies to travelers to India and China. He apprenticed in finance in New York, but returned to Europe to take advantage of opportunities created during the post-war recovery there. Along the way he has acquired the ABC’s of European wealth – an airplane, a Bentley and a house on a Cap in the French Riviera. The depth and breadth of his art collection is impressive, but material things are not what gives him a high. He gets his thrills from identifying a problem, thinking it through and being right in determining how it gets resolved. In his ninth decade, he is an inspiration to me.

He started out by saying he had done some preparation for our visit. “I think the title of your essay should be ‘Dancing around the Fire of Hell.’ For years I’ve been telling you that the accumulation of debt was going to be the ending of the developed world and for years you have been telling me my views are too extreme. The problem is you are an optimist and I am a realist.

Read more
Posted by Unknown at 12:13 PM No comments:

This Libor-manipulation story grows crazier with each passing minute. We have officially disappeared now down the rabbit-hole of the international financial oligarchy.

Former Barclays CEO Bob Diamond is testifying before parliament in London today, and that's sure to bring some shocking moments. But there's already been one huge stunner. In advance of that testimony, Barclays released an email from October 29, 2008, written by Diamond to then-Chairman John Varley and COO Jerry del Messier (who also stepped down yesterday). The email from the CEO to the other two senior Barclays execs purports to detail the content of the conversation Diamond had with Bank of England deputy governor Paul Tucker that same day.

In the email, Diamond essentially tells the other two execs that he has been given permission by Tucker – encouraged, actually – to rig Libor rates downward. What’s even worse is that Diamond’s email suggests that Tucker was only following orders, i.e. that Tucker had received phone calls from "a number of senior figures within Whitehall" – that is, the British government – expressing concern about Barclays' high Libor rates. Tucker in this version of events was acting as a middleman for the British government, telling Diamond to fake his borrowing rates in order to preserve the appearance of financial stability, for the good of Queen and country as it were.

Barclays boss: Banks should not apologise by itnnews