What's Next For Silver? 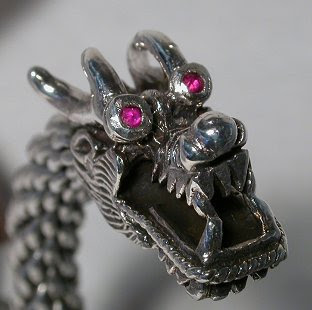 Back in September (with silver at $21/oz) I wrote a piece titled "Does Silver's Smooth Ride Lead Past $30?" My answer to that question at the time was "yes", with a prediction that silver would make a short-term "top" somewhere between $30 - $35/oz.

Thanks to a rude interruption when the banker-cabal launched one of their trademark ambushes of the silver market, that "smooth ride" was somewhat abbreviated early in November. Under different circumstances, I might wonder whether that man-made pause in the market was enough of a consolidation to prepare silver for yet another leg higher. Given current circumstances, however, there appears to be no doubts about silver's current status.

As I observed in that earlier commentary, this recent spike by silver duplicates a chart-pattern which had already had two previous cycles. After both of those sharp spikes, silver suffered wicked sell-offs, thus those following that previous analysis may now be worried that history is about to repeat.

There are two very good reasons why silver bulls should have no fears of the previous pattern continuing to play-out. To begin with, the last crash in silver - which began at the end of the summer of 2008 - was by no means a "natural" reaction of the market to the spike in the price of silver. Rather, as I have written often before, the "Crash of '08" was a Wall Street/U.S. government "joint effort".

Wall Street was desperate to hide the fact that it, and it alone was "going down" with the crash in the U.S. housing sector, and overall economy. Meanwhile, the U.S. government had its own motive for engineering a commodities crash: postponing hyperinflation. Had that massive manipulation/intervention not taken place, there would have been no "crash" in the price of silver - despite the sharp run-up.

How can I be certain of this? This brings me to my second reason for believing there will be no crash in silver following this spike: there isn't anymore silver. No, I'm not claiming that the entire crust of the Earth has been scraped clean of silver. It's the "above ground" silver (i.e. global stockpiles) which has been exhausted. There hasn't been this little available silver in the world for thousands of years.

In that respect, it is irrelevant whether silver had just advanced by 10% or 1000%. If we are "out of silver", the price is going much, much higher. Silver investors should not necessarily expect the same "smooth ride" we saw when silver rocketed from $20 to $30/oz (the first time). That part of the previous chart-pattern has been completed.

In fact, no one can say with certainty how silver will behave in the near future - with the exception of concluding that the price will not make any significant move lower. Indeed, we see signs of inventory "stress" all over - aggravated by the endless inventory-fraud perpetuated by those reporting this data.

Not only are bullion-dealers having difficulties keeping any stock available for buyers, but even the U.S. government itself is desperately looking for ways to weasel-out of making silver available for its own citizens. First there was the announcement by the Obama regime (and reported by GATA) that it was seeking to repeal the law which requires the U.S. mint to produce enough minted coins to "meet demand".

With the general public in North America just beginning to catch-on to the value and scarcity of silver, demand can only go higher, and government mints around the world have struggled to keep pace with demand even prior to this latest spike in interest. Thus, the U.S. government just made a second announcement today: it is delaying the release of a brand-new series of commemorative silver coins dubbed the "America the Beautiful" series.

Given that the government had instructed official dealers to gouge Americans for these coins - by adding a $9/coin "premium" to the price - the "official" reason for delaying the release is that "prices are too high". Yes, delay the release today because prices are too high - and wait instead until silver is $40/oz or $50/oz. That makes sense.

From silver analysts to silver mining executives, anecdotal reports are rolling in that even "industrial" users of silver are having greater and difficulties in locating available stock for their businesses.

More alarmingly (from the perspective of massive silver-shorts like JP Morgan), following their latest attack on the silver market, buyers responded to the "sale" on silver by holding out their hands and asking for "delivery" of roughly ¾ of total COMEX inventories. For the moment, we can expect that silver-buyers will allow themselves to be bought-off with paper "bribes".

As GATA has reported in the past, such tactics have quietly been taking place with the London gold market for roughly a year. But this is no "solution" for JP Morgan and the rest of the silver-shorts. Obviously, the first thing that most of these COMEX customers will do after accepting their paper bribes in lieu of real metal is to buy even more silver for delivery in the next month's contract.

Markets rarely simply shoot higher in a straight line, no matter how out-of-balance that market had previously become. Thus silver investors (and especially those new to the sector) should not be recklessly buying silver, and by "recklessly" what I am referring to is the use of "margin". While the recent hikes in margin-requirements by the CME Group (owner of the COMEX) were clearly intended to be manipulative, as we come closer and closer to an absolute default in this market, we should expect margin requirements to legitimately be raised still higher in the future. Those greedy traders who get hurt by such moves have no one to blame but themselves.

What we know about the silver market today doesn't give us the luxury of "mortgaging the farm" in order to place massive bets on silver. However, what current fundamentals do allow is for ordinary people to invest a significant portion of their wealth in this monetary "insurance" - and know that they have no fears over the longer term of this investment losing value.

Such "one-way" trades are very rare in markets, and those sitting on the fence have no time to dither. Prices could explode still further, inventories could completely collapse - or both - in the near future. While investors will not enjoy quite as much "up side" on their investment as those who started their buying with silver closer to $10/oz, there can be no doubt that over the long-term that silver is heading to a three-digit price.

Knowledgeable investors in this sector already know that the average, long-term price ratio between gold and silver (over roughly 5,000 years) has been approximately 15:1 - and that was when silver was truly abundant in the world. With silver stockpiles exhausted, it would be silly not to expect silver to breach that ratio on the up-side.

Given that the price of gold is at $1400/oz, that implies silver hitting $100/oz even if the price of gold was to freeze at the current price. No one who understands this sector expects that to happen. Adjusted for real inflation, gold would have to rise to over $7,000/oz just to equal its previous high in 1980 - as calculated by John Williams of Shadowstats.com. This means that it is certainly not beyond the realm of possibility that silver could reach a four-digit number over time.

Ordinary people need to protect themselves from the monetary depravity of bankers, as they relentlessly drive the value of the paper currencies they foisted upon us to zero. This mandates that every person must protect their wealth with precious metals, or "go down" with the bankers (and our economies). However, thanks to those very same bankers, people can purchase their monetary insurance today and expect to make nice profits. 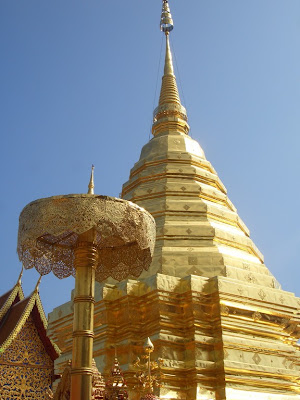 Wat Doi Suthep, Chiang Mai, Thailand
Visiting Wat Doi Suthep today demonstrated very clearly the Thais understanding of gold as a precious metal. The only metal worthy of covering their most sacred relics for thousands of years. Even the Thai money, the Baht used to be a reference to a weight of gold (just like Pound Sterling used to be a weight of sterling silver).
Posted by Unknown at 1:48 AM No comments: 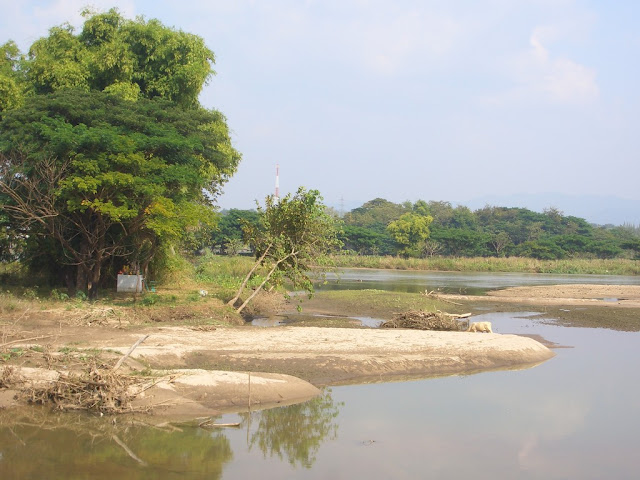 I noticed on my road trip yesterday when we stopped for lunch in the small country town of Ban Tak, whilst small it has been a town for hundreds of years, that in the last 10 years the working age population has been moving to the regional centres, particularly Bangkok for work. Thereby leaving this once active town populated by old women and primary aged school kids.

Like Australia, Thailand's small country towns are losing their banks, doctors and basic government services, reinforcing the need to move to a regional centre or city.
Posted by Unknown at 1:38 AM No comments: