A mutated bird virus that could kill millions has been built by scientists to advance medical knowledge, but should their research be published?


I watched this doco in total after posting it, just before the end it cuts back to Laurie Garrett for a conclusion and I noticed something that caught my eye in the background behind her right shoulder. I used to work many decades ago as a video cameraman for a small freelance documentary & news company, ever since I have been left with a morbid fascination with items in the background of photos and videos. Try it for yourself, look at the extreme edges of videos, particularly outdoor news conferences. People at the outer edge of a camera's field of view invariably believe they are out of shot and hence often betray their feelings through facial expressions that they would have held in check if they knew they were being filmed. Maybe it is how our brain processes images, most of us have a very narrow effective field of view. Whilst our eyes can capture a 180 deg view most choose to process only the part of the image in their most direct line of sight, and therefore project that bias back towards a camera lens not directly pointed at them. 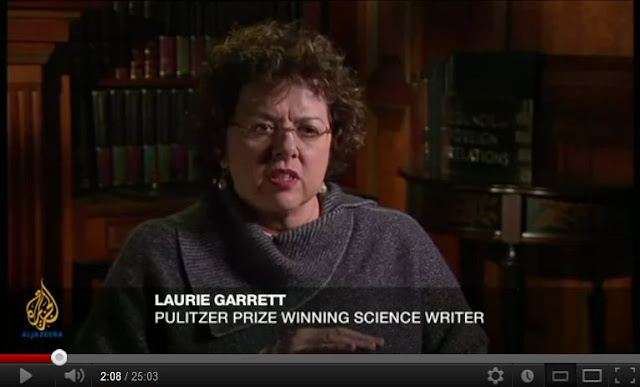 Now look over her right shoulder at the book or brochure on the ornate side table: 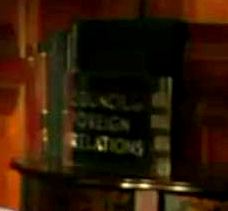 As best as I can make out after cropping and enhancing the image's lighting and colour is the title "Council on Foreign Relations". Whilst I do not have the time and space to discuss the evil nature of the CFR I do find it fascinating that she would "hide" such a subliminal reference in plain view whilst being interviewed for a doco, lets face it, that is discussing the potential for 80%+ of the world's population to be killed by a modified form of bird flu.

Laurie Garrett's bio can be read here, where she proudly lists her association with the CFR.
Posted by Unknown at 8:00 PM No comments:

Bank of America Targets US Firearms and 2nd Amendment

I strongly urge my US readers to close their Bank of America bank accounts and move their business to a small FDIC insured solvent bank. Even then caution is required, use banks for transactions, precious metals for savings.

I highly recommend taking out 15mins from mindless TV viewing and watching this important video. It explains how the world really works and the best reason for holding precious metals.

Posted by Unknown at 6:30 PM No comments:

Are you punching above your weight?

Slavoj Zizek and David Horowitz are the guests for the second episode of Julian Assange's interview show, "The World Tomorrow". "Intellectual superstar" Slavoj Zizek is a philosopher, psychoanalyst and cultural commentator. David Horowitz is a renowned stalwart of hardline conservative American political thought and an unrepentant Zionist.

Double Standards - The truth about Sudan

Going Dutch: 'Game over for euro if Netherlands quits'

The caretaker Dutch Prime Minister is still desperate to push through budget cuts and has called on lawmakers to help him. The government collapsed on Monday when Mark Rutter resigned, as it failed to agree on painful measures demanded by Brussels. The political crisis has already been described as a revolt against enforced EU austerity. UK-based journalist and blogger Neil Clark says there's every chance now the Netherlands will abandon the Euro, which he believes would be disastrous for the single currency.

Posted by Unknown at 1:37 AM No comments:

Britain back in recession

Britain's economy has contracted again taking the UK into its second recession since the financial crisis.