From The Indian Express

Rangarajan, who served as RBI governor, said there are already indications that illegal shipments of the precious metal have gone up in the last three months after the hike in the excise duty.

“That is an indication of how much gold is being smuggled in. I would say to some extent we should dissuade people from holding an asset which does not give a rate of return. However, you can’t go beyond a particular point,” Rangarajan said here at a function organised by the Indira Gandhi Institute of Development Research (IGIDR), an institution set up by RBI.

Former governor YV Reddy said, “If Mercedes Benz and aftershave lotion can be imported, why not gold? It is both an investment and consumption good. Many people seem to mistake that it is only hedge against inflation. There is a demand for it. It is being imported. If you can, try to stop it.”

The RBI Governor D Subbarao said the central bank is “concerned about gold as means of saving because it blocks off savings”.

“We are concerned about gold… lending against gold by non-bank finance companies (NBFCs) because of financial stability concerns. We have been concerned about gold from an external management perspective because of the pressure it puts on current account or capital account depending on your account for it,” Subbarao said.

Reddy added household savings which was an achievement till recently is now the most critical challenge for a future. “The behaviour of household savings indicates that they do not have faith in financial markets except banks. It is a bad sign.”

Tears:  Yes how dare Indians think of protecting themselves from the official inflation rate of 7.45% by saving in gold! Much better they put their currency in a nice little savings account so the bankers can lend it out by many multiples and earn interest on the loans they create from next to nothing. 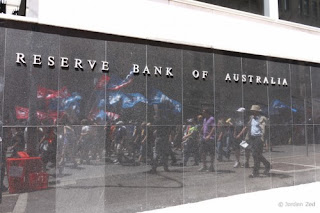 From The Sydney Morning Herald

The Reserve Bank has cut the cash rate to its lowest level since the financial crisis, following a raft of weak economic data that showed pessimism in the jobs market, a slowdown in mining activity and lower-than-expected retail sales.

The RBA cut the cash rate by 25 basis points, or 0.25 percentage points, to 3 per cent, which is the lowest the rate has been since the central bank started setting rates in 1990. It matches the setting in April 2009 at the peak of the GFC.

The Reserve Bank has now lowered its key cash rate by altogether 175 basis points since it embarked on the current cutting cycle in November 2011.

The decision was mostly expected by economists, who cited the softening mining sector and the continued moderating of the Australian economy as reasons why the Reserve Bank would move to lower rates.

Read more: http://www.smh.com.au/business/banking-and-finance/rba-lowers-rates-to-emergency-levels-20121204-2aslb.html#ixzz2E3DHbWN6
Posted by Unknown at 2:40 PM No comments:

The Rise of Skynet

According to an article in Washington Post, the Pentagon is creating an intelligence agency of its own that could rival the CIA in both size and scope. The agency is aiming to have at least 1600 employees in positions around the world, and they won't have to discuss their activity with the Congress. The Pentagon has also reached an agreement to use the CIA's bases and resources abroad.Tony Shaffer of the Center for Advanced Defense Studies joins RT's Kristine Frazao to break it down.

Germany is considering deploying up to 170 soldiers as part of the NATO mission to set up Patriot air defence missiles on the Turkish border with Syria despite more than 60% of Germans being against the move, according to a poll last week.

Ahmadinejad: 'You can't rule with war'

The financial sanctions on Iran are now having a real impact. Earlier this week, people in Tehran openly complained that the Iranian currency is drastically losing value against the dollar, pushing up prices. Meanwhile, Iran's leadership is already dealing with a threat from Binyamin Netanyahu, the Israeli leader, who delivered a strong speech at the United Nations against the Iranian nuclear programme. There is also the situation in Syria, where Iran's relationship with the Assad regime is forcing the Iranian leadership to take sides. And then there is Egypt: A new leader, President Morsi, is changing the geopolitical landscape. Is this an opening for Iran?