To all those that attend the Gold Symposium in Sydney this week I hope you enjoyed yourselves as much as I did and got to listen and speak to the leaders in the industry.

Oct. 16 (Bloomberg) -- James Grant, publisher of Grant's Interest Rate Observer, talks about the impact of the fiscal impasse in Washington on global markets, U.S. debt and the dollar, and the outlook for Federal Reserve policy. Grant speaks with Deirdre Bolton on Bloomberg Television's "Money Moves." 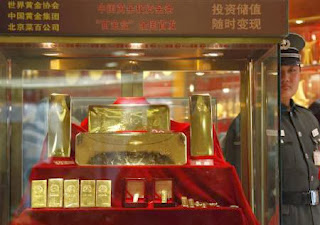 Gold demand across Asia will keep expanding as inflation (INFUTOTY) spurs investment purchases, said HSBC Holdings Plc, estimating that the region’s share of worldwide consumption jumped in the past decade.

Demand for jewelry, bars and coins in India, Greater China, Indonesia and Vietnam increased to about 60 percent of the global total compared with 35 percent in 2004, economists including Frederic Neumann wrote in a note today, citing data from the World Gold Council. Bullion is mostly used in the region as a store of value, Neumann wrote.

While gold is heading for its first annual loss since 2000 as the U.S. recovers and the Federal Reserve weighs tapering stimulus, the slump spurred increased demand among coin and jewelry buyers across Asia. Since 2008, demand for gold in India more than doubled, while consumption in China rose almost 350 percent, Neumann said. The two countries are the largest buyers.

“With inflation still elevated in many markets and interest rates not offering adequate compensation, expect Asia’s voracious appetite for gold to persist,” Neumann wrote. “Asia is going for gold. Over recent years, demand has soared.”

Read more
Posted by Unknown at 4:46 PM No comments: