Paul Craig Roberts: Obama is more of a war monger than Bush/Cheney

From: RTAmerica  | Nov 4, 2011
Iran is being accused by the UN for growing their nuclear enrichment program. The report that has yet to be released is seen as some for an excuse to go to war with Iran. Israel, the US and the UK are rumored to be gearing up for an armed confrontation. Early this year we reported Iran is the first country to have a nuclear power plant in the Middle East. Paul Craig Roberts, former Reagan Administration Official and columnist, gives us his take on the UN's allegations.

Occupy Sydney staged a march and rally in the CBD today with over 2,500 people participating. For a photo blog of the march click on the photo below 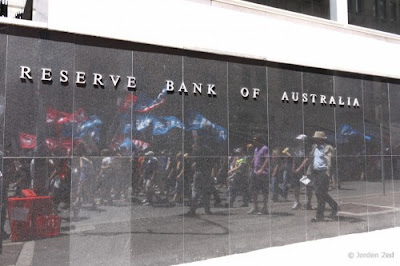 Karl Denninger: If Greece leaves Eurozone it will be on their terms

From: RTAmerica  | Nov 4, 2011
The G-20 summit ended its annual meeting in France today. Greece took center stage on global economic issues. As a result of Greece, European leaders want to establish new guidelines that countries that want to remain in the Eurozone will have to abide by. Greek Prime Minister George Papandreou at one point wanted to give the people of Greece the option to vote on a bailout but later retracted; later tonight there will be a vote on whether Papandreou will remain in power. Karl Denninger from The Market Ticker gives us his take on the results of the G-20 summit.

Clarke and Dawe - The Global Economy

'They will want nukes now!': UK & US plan to strike Iran exposed

From: RussiaToday  | Nov 3, 2011
British officials are reportedly working on a plan to assist U.S. forces in a pre-emptive attack on Iranian military facilities. It follows claims Washington is moving towards a policy of intervention out of fear that Tehran is developing a nuclear weapons program - something Iran has always denied. And political analyst Chris Bambery believes it's the prospect of economic ruin that's motivating the old elite into action.

From: RussiaToday  | Nov 4, 2011
The political and financial turbulence in Greece has shaped discussion at the G20 summit, which has just wrapped up in Cannes. EU leaders voiced strong determination to defend the euro and agreed on bolstering the International Monetary Fund's resources. RT's Anissa Naouai reports.