With Greek PM George Papandreou dancing backwards and forwards between democracy and dictatorship this week I have been forced to bring out Zorba for this weekend's chillout.

and while we are on a role

I spoke to Tim today just before he recorded this video, a very intelligent and well meaning bloke. Good news about the planned rally.

Earlier today police withdrew an application against Occupy Sydney that included 30 conditions to a peaceful rally planned for Saturday November 5th. The conditions demanded that the rally conclude by 4.30pm. Occupy Sydney agreed to modify the route of the planned march to avoid Wynyard Park. Occupy Sydney were represented pro-bono by Stuart Littlemore QC.

I came across a regrouped Occupy Sydney outside St James church in the CBD today. Whilst they were small in number they were very enthusiastic. Sadly they were matched in number by NSW Police, although the police were at least keeping a discreet distance, for the moment. 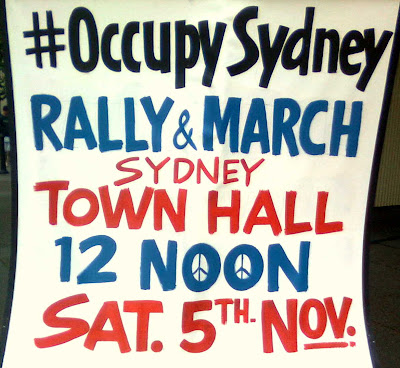 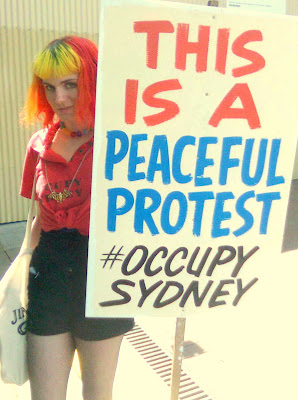 Nov. 3 (Bloomberg) -- James Rickards, senior managing director of Tangent Capital Partners, and Douglas Borthwick, managing director and head of FX trading at Faros Trading, talk about the U.S dollar and Treasuries, China's economy and the potential for intervention by the Chinese government in the European sovereign-debt crisis. He speaks with Pimm Fox on Bloomberg Television's "Taking Stock."

Interesting to see Julia and the representative from Saudi Arabia dressed in Gold indicating they represent some of the few countries in the G20 that actually have any money left. Although Julia could have chosen a better partner to stand next to, at least she had enough sense to stand an arms length away from Berlusconi.

Barry arriving in "The Beast" and being greeted by Napoleon

The new ECB president, Mario Draghi, on Thursday told journalists in a press conference in Frankfurt that growth is likely to remain weak due to the current financial tensions. He also announced a cut in the eurozone interest rates to 1.25%.

Mr. Draghi took over as the new ECB chief on the 1st of November, replacing Jean-Claude Trichet, who held the post for eight years.

Gold is trading up USD$20 on the back of the news of the Greek PM cancelling the referendum.

and as usual silver reacts like a spooked cat

"Risk trades" are back on now that the market is confident that Greece, whilst inventing Democracy is not inclined to use it anytime soon. 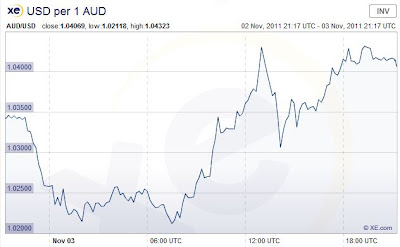 chart from xe.com
Posted by Unknown at 8:25 AM No comments: 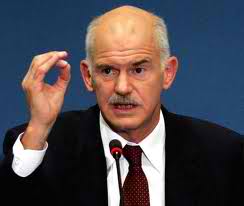 UPDATE 6.50am: GREEK Prime Minister George Papandreou has dramatically scrapped plans for a referendum on the proposed European bailout.

Mr Papandreou has been under intense pressure to stand down, after a split emerged in his government over the plans to hold a public vote on the rescue deal.

The American-born premier is not intending to quit, and will instead hold talks with the opposition over their calls for a transitional government and early elections.

"The referendum was never an end in itself," Mr Papandreou told an emergency meeting of his cabinet. "We had a dilemma - either true assent or a referendum. I said yesterday, if the assent were there, we would not need a referendum."

The news spooked markets around the world........read on
Posted by Unknown at 8:11 AM No comments:

This week Max Keiser and co-host, Stacy Herbert, discuss the new world order in which we're all Greeks because we didn't see the signs in 1969 - "Make Love, Not Debt." In the second half of the show, Max Keiser interviews Birgitta Jonsdottir, about the true state of transparency, banking and economy in the latest IMF poster child, Iceland.