Yes, Lauren is back!

Juice Rap News: Episode 15 - Big Brother is WWWatching You. September 2012 rocks around with some crucial developments in the ongoing struggle over the future of the internet. Will it remain the one open frequency where humanity can bypass filters and barriers; or become the greatest spying machine ever imagined? The future is being decided as we type. Across Oceania, States have been erecting and installing measures to legalise the watching, tracking and storage of data of party-members and proles alike. If they proceed, will this place ever be the same? Join our plucky host Robert Foster as he conducts an incisive analysis of the situation at hand. Joining him are newly appointed Thought Police General at the Pentopticon, Darth O'Brien Baxter, and a surprisingly lucid Terence Winston Moonseed. Once again, in the midst of this Grand Human Experiment, we are forced to ask tough questions about our future. Will it involve a free internet which will continue to revolutionise the way the world communicates with itself? Or is our picture of the future a Boot stamping on this Human InterFace forever? 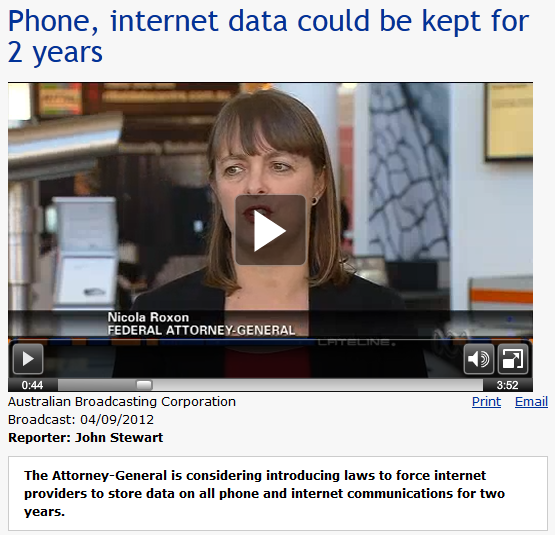 I just noticed that a one ounce bar at ABC Bullion just hit in AUD1,700. This rise is off the back of a stable US$ Gold price but a declining Aussie Dollar.

Posted by Unknown at 5:53 PM No comments:

A brand new show on the RT Network hosted by Abby Martin, 'Breaking the Set' seeks to smash through the Left/Right Paradigm set in the media and political establishment to find the middle ground: the truth. On the debut show of "Breaking the Set," Abby Martin calls out the Mainstream Media for not talking about Military Spending, interviews Retired Colonel Douglas MacGregor about the 'inevitability' of US intervention in Syria, highlights Desmund Tutu as today's Hero, and Kathy Fairbanks as today's Villain, speaks to Producer Manuel Rapalo about the DNC coverage in the corporate press and explores ugly side of surveillance with the Automated License Plate Reader program.

Regardless of how far the study of economics has advanced, the disorderly and ambiguous terminology cited by Eugen von Böhm-Bawerk over a century ago still exists. For example, Friedrich Hayek complained about the kaleidoscope of definitions surrounding the word “capital” (1941). Fritz Machlup also emphasized this point in Economic Semantics (1991), with a call for clarity in definition. It is only after analysts – armed with first principles – develop definitions and classification systems that data can be properly collected, sorted, and analyzed, in a way that can be replicated.

This chapter supplies what has been long overdue in the study of hyperinflation – a table that contains all 56 hyperinflation episodes, including several which had previously gone unreported. Access the report here
Posted by Unknown at 5:21 PM No comments:

In this episode, Max Keiser and Stacy Herbert discuss boom boom sticks and squeaky wheels and ask whether spending on the military is more libertarian than spending on teaching prostitutes to drink responsibly. And they envision a post leveraged buyout America in which we open up Fort Knox and find only a printer. In the second half of the show, Max Keiser talks to Karl Denninger of Market-Ticker.org and the Florida Libertarian Party about jack-booted statists in libertarian clothing.


John Clarke and Brian Dawe on the subject of printers.