Gold has just taken out $1820 in early New York trade after rising strongly in London. Paper bugs are desperately trying to get out of their soiled shorts. This does not bode well for equities, I just checked the DJIA and it is off 185 points. 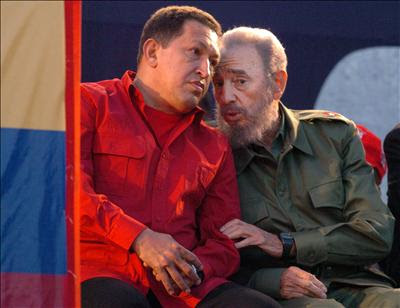 CARACAS -- Venezuelan President Hugo Chavez ordered his government to repatriate $11 billion in gold held in banks abroad to safeguard the country from the economic crisis and said he’ll nationalize the local gold industry.

Venezuela has about 211 tons of its 365 tons of gold reserves held abroad at institutions including the Bank of England, JPMorgan Chase & Co., Barclays Plc, Standard Chartered Plc, and the Bank of Nova Scotia, according to a government document.

"We've held 99 tons of gold at the Bank of England since 1980. I agree with bringing that home," Chavez said today on state television. "It's a healthy decision."

Chavez, who has said he wants to eliminate the "dictatorship" of the U.S. dollar, has called on Venezuela's central bank to diversify its $28.7 billion in reserves away from U.S. institutions. Some cash reserves, which total $6.3 billion, will be shifted into currencies from emerging markets, including China, Russia, Brazil, and India, central bank President Nelson Merentes said today at a news conference.

Venezuela's 365.8 metric tons of gold reserves makes it the 15th-largest holder of the precious metal in the world, according to an August report from the World Gold Council. Venezuela's gold holdings accounted for about 61 percent of the nation's international reserves, according to the report.

Posted by Unknown at 5:43 AM No comments:

Gerald Celente: From the trenches


Gerald Celente, Publisher of the Trends Journal gives Adam an update on the first great war of this century.

Posted by Unknown at 3:01 AM No comments:

Dollar decline 40 years in the making?

Posted by Unknown at 2:00 AM No comments: