I thought we would take a trip back in time to when the USD silver price had a $15 handle, no not last Friday, the Eighties!! - Do you remember the 80's? Well most of it was best forgotten but there were some gems worth rescuing, like this video of a ridiculously self confident 17yo Kate Ceberano. Watch this video and you just know she was destined for bigger things. 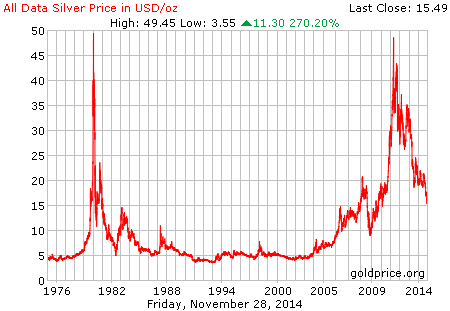 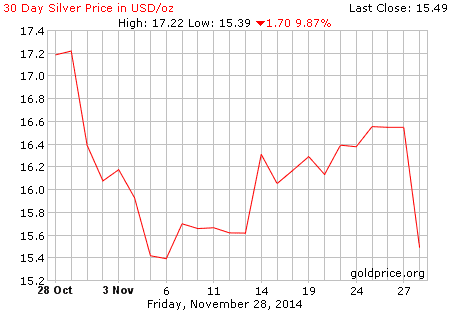 Gold Shortage, Worst In 21st Century, Sends 1Y GOFO To Lowest Ever... And India Just Made It Worse

While we have covered the aberration that is a negative gold GOFO rate previously and in extensive detail in this post, an abridged version of what negative GOFO means comes courtesy of Deutsche Bank's recent discussion on what a successful Swiss gold referendum. To wit: "It is interesting to note that benchmark gold-dollar swap rates have recently traded negative, meaning investors are paying to borrow gold. This is unusual as gold is traditionally used as a source of collateral for cash financing.... [A] number of factors may play a role, such as excess dollar liquidity or an increased demand for collateral on the back of the global regulatory developments." In short a gold shortage at the institutional, read commercial and central bank, level. And not just a shortage but the biggest shortage in history, judging by today's latest plunge in the 1 Month GOFO which just dropped to -0.5% and , worse, 1 Year GOFO that just hit its lowest print in the 21st century, and is also about to go negative: something that has never happened before further suggesting the gold shortage could go on for a long, long time!
Negative GOFO

To be sure, GOFO has printed negative in the past, although the two most prominent historic plunges were due to acute events which promptly renormalized, and were not the result of what has now become a chronic gold collateral shortage via the swaps market.

The best known example of a complete collapse in the GOFO rate, is the September 1999 Washington Agreement on Gold, which was an imposed "cap" on gold sales (mostly European in the aftermath of Gordon Brown's idiotic sale of UK's gold) to the tune of 400 tons per year. The tangent of the Washington Agreement is quite interesting in its own right. Recall the words of Milling-Stanley from the 12th Nikkei Gold Conference:


"Central bank independence is enshrined in law in many countries, and central bankers tend to be independent thinkers. It is worth asking why such a large group of them decided to associate themselves with this highly unusual agreement...At the same time, through our close contacts with central banks, the Council has been aware that some of the biggest holders have for some time been concerned about the impact on the gold price—and thus on the value of their gold reserves—of unfounded rumours, and about the use of official gold for speculative purposes.

"Several of the central bankers involved had said repeatedly they had no intention of selling any of their gold, but they had been saying that as individuals—and no-one had taken any notice. I think that is what Mr. Duisenberg meant when he said they were making this statement to clarify their intentions."

Of course, this happened in a time long ago, when the primacy of Fractional reserve banking was sacrosanct, when the first Greenspan credit bubble (dot com) was yet to appear, and when barbarous relics were indeed a thing of the past, only to be proven oh so contemporary following not one, not two, but three subsequent cheap-credit bubbles which have vastly undermined the religious faith in fiath and central banking, sending the price of gold to all time highs as recently as 2011.

Another subsequent negative GOFO episode occurred in early 2001, which coincided with what has been rumored to be a speculative attack and reversal of the futures market. However, while pushing 1 month rates negative, 3 month rates remained well positive.

The only other time when both 1M and 3M GOFOs were both negative or almost so (3M touched on 0.05%) was in the aftermath of the AIG bailout following the Lehman collapse in November 2008, which reset the GOFO rate to just barely above 0% where it has traded for most of the time, at least until last summer when in a widely documented episode of negative GOFO rates, GOFO went negative in July of 2013 and remained in negative territory for over a month.

Which brings us to today, when not only is the 1 Month GOFO rate the most negative it has been since 2001, not only is 2 through 6 Month GOFO also negative, and in fact the 6 Month GOFO is now negative for the longest stretch in history clocking in at 11 consecutive days, but, strangest of all, the gold curve backwardation is about to become absolutely historic with 1 Year GOFO just a whisper away from hitting negative territory for the first time ever at 0.02667%.

But how is it possible that there is a shortage of gold when gold prices keep tumbling day after day, the skeptics will ask? Simple: the shortage involves gold "available" in the repo market, i.e., gold that already has been rehypothecated one ore more times. Keep in mind that central banks rarely if ever purchase gold outright in the open market, unlike Russia of course (and perhaps China), which has been engaging in an unprecedented gold buying spree over the past year. The rest of the commercial and central banks merely rely on shadow banking conduits and other repo channels to satisfy their gold needs, all of which merely demand the "presence" of synthetic, if not actual physical gold.
It is this synthetic "shadow" gold that is now actively disappearing from the system.Of course, if and when central banks were to tip their hand and reveal the unprecedented synthetic shortage to the physical market, the actual cleared market may well go bid only.

One event that may stretch the already ridiculous disconnect between physical and swap-based gold, is the announcement earlier today by India which just scrapped a rule mandating traders to export 20 percent of all gold imported into the country, in a surprise move that could cut smuggling and raise legal shipments into the world's second-biggest consumer of the metal after China.
As Reuters reports, "along with a record duty of 10 percent, India introduced the so-called 80:20 import rule tying imports to exports of jewellery last year to bring down inbound shipments and narrow the current account deficit that had hit a record.

"It has been decided by the Government of India to withdraw the 20:80 scheme and restrictions placed on import of gold," the Reserve Bank of India (RBI) said on Friday, without giving a reason for the change in the rule.

The reason today's announcement was stunning is that only days ago there were talks between officials of the Mumbai-based central bank and the finance ministry in New Delhi to bring back curbs on some trading houses following a surge in imports over the past few months.

Traders said before the decision on Friday that India's gold imports could climb to around 100 tonnes for a third straight month in November as dealers bought heavily on fears of curbs on overseas purchases, especially as the wedding season picks up.

The government's latest move came as a surprise even to some officials.
A policymaker associated with India's gold import policy said the government instructed the RBI at 1830 local time on Friday to urgently change the rule. A notification was posted on the central bank's website two hours later.
"We were not informed about the reason for scrapping this rule. The restrictions on who all can import who can't are still valid," said the policymaker, declining to be named as he is not authorised to talk to media.
And while those in control are unhappy that India's relentless appetite for gold is about to return, and in the process slam the country's current account deficit, at least one group is happy: "the rule change was a relief to jewellers facing difficulties in sourcing gold during the key festival and wedding season that started in October."


Bachhraj Bamalwa, director of the All India Gems and Jewellery Trade Federation, said the 80:20 rule was not only encouraging smuggling but was also misused by many traders.

From getting human mules to swallow nuggets to hiding gold bars in dead cows, smugglers had raised their activity since the middle of last year after the import curbs.

Following the disbanding of the 80:20 rule, the government may place a monthly or yearly quota for traders, said Sudheesh Nambiath, a senior analyst at consultancy Thomson Reuters GFMS.

"Quota is a more logical and simple way of monitoring and limiting gold imports," Nambiath said.

Bottom line: one can again add India to the list of end-market where hundreds of tons of physical gold will end up, never to be heard from again.
And then there is of course the wildcard of the Swiss gold referendum on Sunday, where a "Yes" vote would lead to the immediate collapse of the gold price suppression mechanism as the swap-based gold shortage breaks through merely shadow conduits and finally makes its way to the real market. Which, of course, is why it will never be allowed to happen.
Posted by Unknown at 10:07 AM No comments: