Why Are the Chinese Buying Record Quantities of Gold? 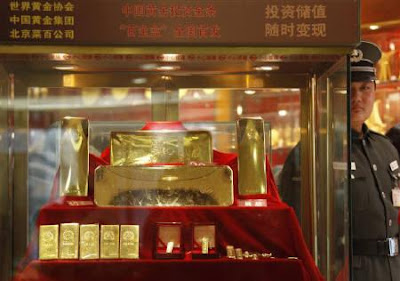 This month, the Hong Kong Census and Statistics Department reported that China imported 102,779 kilograms of gold from Hong Kong in November, an increase from October’s 86,299 kilograms. Beijing does not release gold trade figures, so for this and other reasons the Hong Kong numbers are considered the best indication of China’s gold imports.

Analysts believe China bought as much as 490 tons of gold in 2011, double the estimated 245 tons in 2010. “The thing that’s caught people’s minds is the massive increase in Chinese buying,” remarked Ross Norman of Sharps Pixley, a London gold brokerage, this month.

So who in China is buying all this gold?

The People’s Bank of China, the central bank, has been hinting that it is purchasing. “No asset is safe now,” said the PBOC’s Zhang Jianhua at the end of last month. “The only choice to hedge risks is to hold hard currency—gold.” He also said it was smart strategy to buy on market dips. Analysts naturally jumped on his comment as proof that China, the world’s fifth-largest holder of the metal, is in the market for more.

Read more
Posted by Unknown at 5:02 PM No comments:

Michael Hudson - In America and Europe, Crime has been Decriminalized

Posted by Unknown at 3:13 PM No comments:

Gerald Celente on ZIRP and Gold

A powerful, wide ranging interview on the Fed's interest rate policy and the resultant effect on Gold and Silver with Eric King of King World News.......listen here
Posted by Unknown at 8:36 AM No comments: