The Stench of American Hypocrisy...Eyes Only on Burma 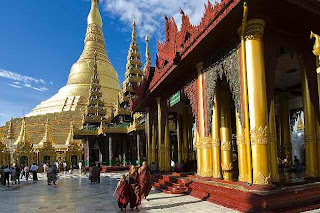 The military regime that rules Burma just released from house arrest the pro-democracy leader, Aung San Suu Kyi. The American media used the occasion of her release to get on Burma’s case for the absence of the rule of law. I’m all for the brave lady, but if truth be known, “freedom and democracy” America needs her far worse than does Burma.

I’m not an expert on Burma, but the way I see it the objection to a military government is that the government is not accountable to law. Instead, such a regime behaves as it sees fit and issues edicts that advance its agenda. Burma’s government can be criticized for not having a rule of law, but it cannot be criticized for ignoring its own laws. We might not like what the Burmese government does, but, precisely speaking, it is not behaving illegally.

The list of criminal actions by presidents Bush and Obama, Vice President Cheney, the CIA, the NSA, the US military, and other branches of the government is long and growing. For example, both president Bush and vice president Cheney violated US and international laws against torture. Amnesty International and the American Civil Liberties Union responded to Bush’s recent admission that he authorized torture with calls for a criminal investigation of Bush’s crime.

In a letter to Attorney General Eric Holder, the ACLU reminded the US Department of Justice (sic) that “a nation committed to the rule of law cannot simply ignore evidence that its most senior leaders authorized torture.”

The ACLU and Amnesty International do not want to admit it, but the US government shed its commitment to the rule of law a decade ago when the US launched its naked aggression--war crimes under the Nuremberg standard--against Afghanistan and Iraq on the basis of lies and deception.

The US government’s contempt for the rule of law took another step when President Bush violated the Foreign Intelligence Surveillance Act and had the National Security Agency bypass the FISA court and spy on Americans without warrants. The New York Times is on its high horse about the rule of law in Burma, but when a patriot revealed to the Times that Bush was violating US law, the Times’ editors sat on the leak for one year until after Bush was safely re-elected.

Holder, of course, will not attempt to hold Bush accountable for the crime of torture. Indeed, Assistant US Attorney John Durham has just cleared the CIA of accountability for its crime of destroying the videotape evidence of the US government’s illegal torture of detainees, a felony under US law.

Last February Cheney said on ABC’s This Week that “I was a big supporter of waterboarding.” US law has always regarded waterboarding as torture. The US government executed WW II Japanese for waterboarding American POWs. But Cheney has escaped accountability, which means that there is no rule of law.

Vice president Cheney’s office also presided over the outing of a covert CIA agent, a felony. Yet, nothing happened to Cheney, and the underling who took the fall had his sentence commuted by president Bush.

Not only is Obama violating the sovereignty of an American ally, Pakistan, by sending in drones and special forces teams to murder Pakistani civilians, but in addition Obama has a list of American citizens whom he intends to murder without arrest, presentation of evidence, trial and conviction.

The most massive change brought by Obama is his assertion of the right of the executive branch to murder whomever it wishes without any interference from US and international law. The world has not seen such a criminal government as Obama’s since Joseph Stalin’s and Hitler’s.

On November 8, the US Department of Justice (sic) told federal district court judge John Bates that president Obama’s decision to murder American citizens is one of “the very core powers of the president.” Moreover, declared the Justice (sic) Department, the murder of American citizens is a “political question” that is not subject to judicial review.

In other words, federal courts exist for one purpose only--to give a faux approval to executive branch actions.

The military regime did not throw her into a dungeon and rape and torture her under cover of false allegations and indefinite detention without charges. Moreover, the military “tyrants” released her either as a sign of good will or under pressure from international human rights groups, or some combination of the two.

But, alas, in America macho tough guys approve the virtual strip search of their wives and daughters by full body scanners and the grouping by TSA thugs of three-year old children screaming in terror.

Posted by Unknown at 1:40 PM No comments:

The One-handed Economist took a new position in its letter of September 17, 2010 shifting its commodity holdings from gold to silver. Another change of position is in a special bulletin issued Nov. 10, 2010. However, since this is so recent, in order to learn the contents a subscriber must cross my palm with silver. (See below.)

Today I would like to continue my discussion of the (so-called) Great Depression as this is the giant lie which is behind most of the other economic lies which have deceived so many people and cost them so much money.

What is a depression? It is a period in a country's economic history where the large majority of the people become poorer. It is alleged that such a period occurred in the early 1930s. I have pointed out previously that Economic Statistics of the United States, Colonial Times to 1970, reports that during this period Americans shifted from margarine to butter. They increased their per capita meat consumption (from 129 lb to 144 lb.). And they gave (substantially) more to charity. Further, real wages rose during this period, and the savings of the average American increased in value (buying power) by 30%. This does not sound like a getting poorer to me......read on

Posted by Unknown at 1:25 PM No comments: 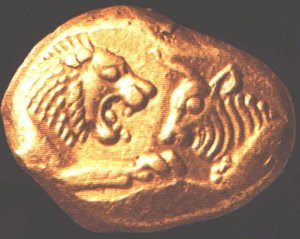 Since World Bank president Robert Zoellick put forth the idea for a new global currency that was influenced by the price of gold, the global media has pounced on his remarks, and completely misconstrued them to report that he was advocating for a 'return to the gold standard'. First of all, (and I do apologize Mr. Zoellick if I misinterpret some of your statements inadvertently), what was most noteworthy about his statement was not so much that the new monetary instrument would be linked to gold, but that we need a new currency. He's openly advocating for the replacement of the U.S. dollar as the official instrument of trade for the world, which is, in reality, the first meaningful step in repairing the global financial system and returning to a state of economic health. Small wonder it was the U.S. mainstream financial outlets that dominated the assault on Zoellick......read on