This weekend's chillout is dedicated to Blythe Masters. After all the monkey business in the silver market over the last 10 years after watching Blythe in this video I am finally a believer.

I took this pic from my balcony this afternoon looking towards the Pacific Ocean. 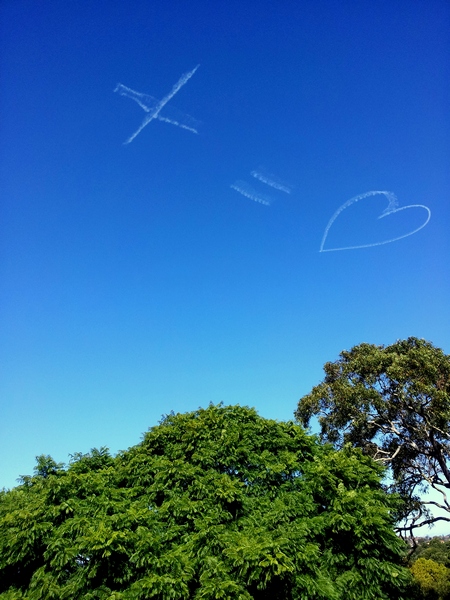 Why We Must Choose Beauty & Life Over Greed, Misery & Destruction

I used to work for one of Australia's leading big four banks in the late 80's early 90's. Even though it was run by the "smartest guys in the room" one year during that period they reported Australia's largest corporate loss in history (at that time, no doubt others have over-achieved this feat since). A company that creates loans by their clients signing a loan document or swiping their credit card, then charges interest on that loan that was immaculately conceived can still f it up so badly as to loose money. I still get a laugh out of that all these years later. Anyway that is in my distant past, I now sell Silver and Gold to atone for my bankster sins.

Another top report from my favourite Bangkok based analyst, JS Kim.

In this episode, Max Keiser and co-host, Stacy Herbert, discuss Ben Bernanke's 'happy dust' and Angela Merkel's 'red lines' cause ire in BRICS trade partners. In the second half of the show Max talks to Jim Rickards about a BRICS currency, gold and the fog of currency war.

As my long dead mentor was oft to say "There is no bullshit, like Yankee bullshit", even if in this case it is electroplated with a toff Pommy accent. Blythe Masters the head of global commodities division of JP Morgan Chase (JPMC) discusses amongst other things the obviously non-existent manipulation of the silver market with some sycophant from CNBC.

Takeaways from the screen-side chat (thanks to the Doc for the transcript):

"There's been a tremendous amount of speculation particularly in the blogosphere on this topic. I think the challenge is it represents a misunderstanding as the nature of our business. As I mentioned earlier, our business is a client-driven business where we execute on behalf of clients to achieve their financial and risk management objectives. The challenge is that commentators don't see that. So to give you a specific example, we store significant amount of commodities, for example, silver, on behalf of customers we operate vaults in New York City, Singapore and in London. And often when customers have that metal stored in our facilities, they hedge it on a forward basis through JPMorgan who in turn hedges itself in the commodity markets. If you see only the hedges and our activity in the futures market, but you aren't aware of the underlying client position that we're hedging, that would suggest inaccurately that
we're running a large directional position. In fact that's not the case at all."

- Why would you want to store your silver in the sess pools that are New York and London? Aren't they the sites of the largest financial crimes since the collapse of the Roman Empire? Also didn't they recently experience the two most wanton terrorist style attacks in western history? Wouldn't you rather store in secure, safe Sydney or Zurich or better still by yourself?

"Manipulating metals would be wrong and we don't do it"
- but of course! Anyway it does not seem to have been too successful long term anyway:

Blythe Sally Jess Masters (born 22 March 1969) is an economist and current head of global commodities at J.P. Morgan Chase. She attended The King's School in Canterbury on scholarship.[3] She graduated in 1991 from Trinity College, Cambridge with a B.A. in economics, and joined the bank J.P. Morgan & Co. after completing a number of internships there while still a student.[4]

Responsible for the structuring and distribution of credit derivative products at J.P. Morgan, Ms. Masters became a managing director at 28, the youngest woman to achieve that status in the firm's history.[5] She is widely credited with creating the modern credit default swap, a form of insurance that protects a lender if a borrower of capital defaults on a loan.[6] In 1994, J.P. Morgan had extended a $4.8 billion credit line to Exxon, which faced the threat of $5 billion in punitive damages for the Exxon Valdez oil spill. A team of J.P. Morgan bankers led by Ms. Masters then sold the credit risk from the credit line to the European Bank of Reconstruction and Development in order to cut the reserves which J.P. Morgan was required to hold against Exxon's default, thus improving its own balance sheet. J.P. Morgan later bundled together packages of these loans and offered them to market as BISTRO, for Broad Index Secured Trust Offering, and these new financial instruments were quickly adopted by other banking institutions.[6]

When derivatives played a role in the 2008 financial crisis, Masters maintained the misuse of credit derivative products as instruments of speculation required regulators to distinguish between tools and their users: “Tools that transfer risk can also increase systemic risk if major counterparties fail to manage their exposures properly.”[7] In April 2010 she told the Economic and Monetary Affairs Committee of the European Parliament that "there are definitely lessons that have to be learnt. I for one feel that I have learnt from that experience and there are things I may like to have seen done differently".[8]
Posted by Unknown at 10:19 AM No comments: