Breaking The Set - Venezuela more Democratic than US?

Market Pulse: No downturn for gold

Oct. 8 - A two-day dip in gold prices is unlikely to last as long as markets can be confident of central bank support for liquidity, says Commerzbank's head of commodity research, Eugen Weinberg. 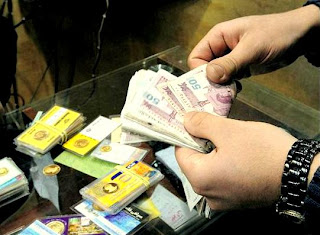 Iran has few policy options to end turmoil in its currency markets, as the U.S. and allies seek to inflict enough economic pain to force the Islamic republic into concessions over its nuclear plans, analysts said.

The rial has depreciated as much as 40 percent against the dollar in street markets since August and gold purchases have surged as residents seek to shield savings. The currency plunge led to unrest in Tehran’s markets last week as police used tear gas to end protests. Iran has raised interest rates on deposits and opened an exchange center to stabilize the currency market.

The run on the rial has exacerbated inflation that had already been pushed up by the removal of subsidies on energy and food. The official rate rose to 23.5 percent in August. The real rate, which adjusts for the currency depreciation, is three times that, according to Steve Hanke, a professor of applied economics at Johns Hopkins University in Baltimore.

“We’re getting into what is technically hyper-inflation,” with an “implied inflation rate” of about 70 percent a month, Hanke said.

Concern that savings are being eroded is leading Iranians to other assets, including gold and property.

Read more
Posted by Unknown at 9:41 AM No comments:

The Intruders crash the Investment Banking Awards in Mayfair

The Intruders are back, with their mighty chutzpah

The Investment Banking Awards are the Oscars of the financial world. Dished out for so-called 'innovation', some of the world's richest bankers gather together to congratulate each other on devising ever more creative ways to make obscene sums of money.

Chinese spies infiltrating the US via telecoms?

Oct 8, 2012 by RTAmerica Two Chinese telecommunication companies, Huawei and Zte, have attempted to expand into the United States. But in an age where cybersecurity is considered an emerging threat—and espionage an ever-present one—the US isn't exactly welcoming the foreign businesses with open arms. Congress has flagged both Huawei and Zte as security threats and is warning them against doing business in America. Tim Karr, senior director of strategy for FreePress, weighs in on what the likelihood of such a contract could be given Congress' constant warnings of an imminent cyberwar.