"A new report on targeted killing by C.I.A. drones in Pakistan's tribal area concludes that the strikes have killed more civilians than American officials have acknowledged, alienated Pakistani public opinion and set a dangerous precedent under international law. The report, by human rights researchers at the Stanford and New York University law schools, urges the United States to "conduct a fundamental re-evaluation of current targeted killing practices" including "short- and long-term costs and benefits." It also calls on the administration to make public still-secret legal opinions justifying the strikes...".* The Young Turks host Cenk Uygur breaks it down. 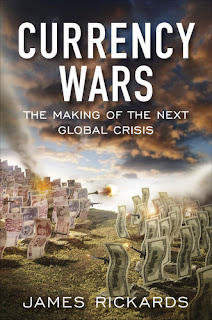 Fox Buisness (Sep 25, 2012): James Rickards, “Currency Wars” author, on the Fed’s monetary policy and why he believes we are in a currency war today. Jim discusses the strong Australian Dollar and that those holding Aussie Dollars should be buying gold whilst the AUD remains strong. Video link

Jim Rickards will be the keynote speaker at the upcoming Gold Symposium in Sydney, Australia 22-23 October 2012. For the list of other speakers and Symposium details go here

Capital Account - Peter Tchir on the Dangers and Pitfalls of a World Reaching for Holy Grail Yield!

Posted by Unknown at 3:50 PM No comments:

For the Full, Commercial Free, 10 Modules of the Sons of Liberty Academy plus hundreds of supporting documents and videos go to http://SonsOfLibertyAcademy.com

Gold is not just a lunatic fringe investment

Gold is often derisively referred to as an investment that only kooks who are preparing for the end of the world in a bunker can love. But it might be time to stop with all the gold bashing.

Sure, plans to return to the gold standard may still seem a bit extreme. (Sorry Ron Paul and your loyal minions!) Yet if you look at the reason why gold has done so well lately, it seems logical to expect the price of the yellow metal could continue to climb, blow past its current all-time high (not adjusted for inflation) of about $1,923 an ounce and surpass $2,000 in the process.

Gold is hovering around $1,770 right now. The price has risen more than 12% since the beginning of the year and is up 6.5% in the past month alone. Gold's rally first started to pick up steam a few weeks ago, on the back of the European Central Bank's plan to buy up bonds of troubled sovereign nations.

The Federal Reserve followed the ECB's lead and launched QE3 just a week later. Central banks in Japan and England are also in easing mode and with China's economy slowing, it would not be a huge shock if the People's Bank of China were to soon announce its third interest rate cut of the year.

Add all that up and it's very bullish for gold. Central banks printing money like there's no tomorrow ultimately should lead to lower values for the currencies of countries in easing cycles, as well as inflation. And inflation is gold's best friend.

Read on
Posted by Unknown at 11:50 AM No comments:

Oh bugger, I have gone and invested 90% of my retirement savings in precious metals and have achieved a 5 year annualised return of 40%. What I should have done according to CNN Money was invest in a diversified portfolio of international/domestic shares and government bonds managed by professionals and been extremely happy with a 5 year annualised return of 4%. I am so disappointed that I did not hear this valuable advice earlier :-(

Where are Asia's Millionaires investing?

This is very significant for the Gold and to a lesser extent Silver markets. In the last bull market in Gold and Silver, where Gold hit a high of $850/oz and Silver $50/oz in January 1980, the price rise was driven mostly by 1 - 2% of wealthy US investors, private wealth fund managers and a few Middle East sheiks and princes trying to protect themselves from the loss in value of the US$. What a difference 30 years makes, now we have huge pool of millionaires in a region that has a cultural affinity with investing in Gold (and increasing so in Silver) what do you think what will happen when 1 - 2% of these investors investors turn in mass to Gold to protect them against a falling US dollar (and dollar linked Yuan/HKG$)? And with QE to infinity a declining US dollar is given.

Got Gold?  Yes, I bought some before all those Chinese millionaires did.

In this episode, Max Keiser and Stacy Herbert discuss the bankstatocracy that has led to what the mainstream financial media calls an 'unintended' wealth gap in the consumer sector - between those recovered-from-recession and those still-struggling. To suggest that this gap is intentional, however, is considered now 'suspicious' behavior by the US government. And they also look at the 'wealth managers' for the poor in Australia. In the second half of the show, Max Keiser talks to privacy extremist Frank Braun about sneaker net and privacy, the libertarian case for bitcoin and a flourishing over the counter bitcoin exchange.