Bob Chapman - The EU is in Huge Trouble and We're Next

Posted by Unknown at 7:21 PM No comments:


Tempers are getting frayed in Washington over ongoing budget talks. The fourth crisis meeting between congressional leaders ended with President Barack Obama saying enough was enough and he would not compromise further.


Security has been tightened with major cities across India put on high alert after three coordinated bombs ripped through crowded districts of Mumbai.

Posted by Unknown at 7:09 PM No comments: 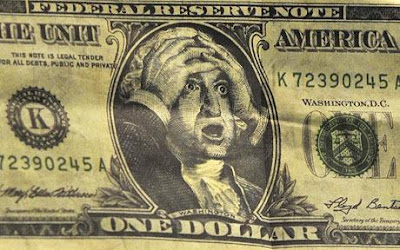 Moody’s Investors Service put the U.S. under review for a credit rating downgrade as talks to raise the government’s $14.3 trillion debt limit stall, adding to concern that political gridlock will lead to a default.

The Aaa ratings of financial institutions directly linked to the U.S. government, including Fannie Mae, Freddie Mac, the Federal Home Loan Banks, and the Federal Farm Credit Banks, were also put on review for cuts, Moody’s said in a statement today.

The U.S., rated Aaa since 1917, was put on review for the first time since 1995 on concern the debt limit will not be raised in time to prevent a missed payment of interest or principal on outstanding bonds and notes even though the risk remains low, Moody’s said. The rating would likely be reduced to the Aa range and there is no assurance that Moody’s would return its top rating even if a default is quickly cured.....read on 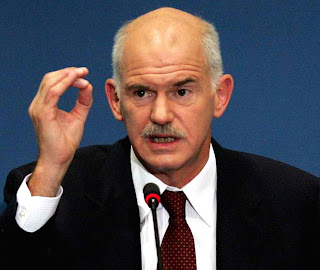 "The current mood doesn't help us to get through this crisis," Papandreou told the Financial Times Deutschland, in a brief preview of an interview to be published in the paper's Thursday's edition.

"This uncertainty scares investors. If we don't get a decision soon supporting the second Greek programme so that the country can begin its far-reaching reforms, the programme itself could be held up."........read on
Posted by Unknown at 5:57 PM No comments:

Silver recovers some of it post-high lustre 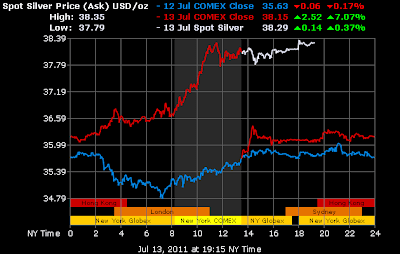 Silver has moved higher by over US$3/oz over the last 3 days dragged higher by new all time highs in its sister metal gold. Also by the nature of the silver market being a tiny % of the size of the gold market, any fund flows are significantly amplified.

Also many astute investors are coming to believe that silver is in fact rarer in bullion form than gold (something mentioned on this blog for over 1 year) as typified by unending shortages of retail size silver bars (and occasionally coins) since September last year.
Posted by Unknown at 9:28 AM No comments:

Ben Bernanke - Another round of quantitative easing may yet be needed 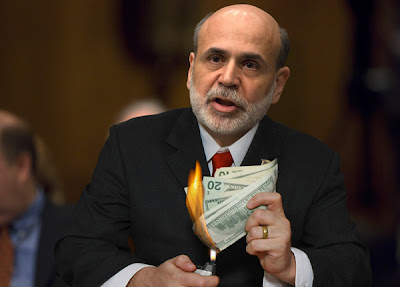 NEW YORK (Dow Jones)--The euro climbed against the dollar Wednesday after Federal Reserve Chairman Ben Bernanke said another round of quantitative easing may yet be needed, should the U.S. economy remain weak. The single currency also gained on news that Fitch Ratings expects Italy to successfully implement a deficit-reduction plan.

Stronger demand for riskier assets also put a dent in the dollar, diminishing its safe-haven appeal. While the euro began to recover on the absence of more negative euro-zone news, the dollar set a record low against the safe-haven Swiss franc.

"Fed Chairman Ben Bernanke has made it plain to the world that the Fed is not ready to put the U.S. economy's crutches back in the closet," Douglas Borthwick, managing director with Faros Trading, said. "Saying the economy still requires a good deal of support, the chairman is making it plain that QE3 is still on the Fed's mind and is on the table."

During his semiannual congressional testimony, Bernanke acknowledged that the pace of the economic recovery has remained soft, and that the Fed might yet be prepared to embark on yet another round of quantitative easing (QE3) to jumpstart the economy.

Although appetite for higher-yielding assets was the main storyline of early trading, traders said that beneath the surface, investors were still nervous about Europe's debt crisis. That underlying sentiment has helped support safe havens such as gold, which also set a record Wednesday.....read on 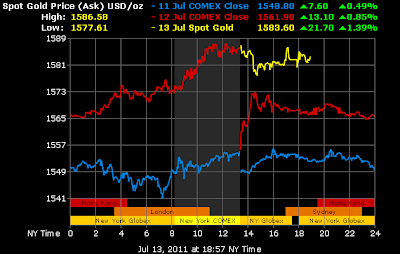 Gold hist an all time intra-day high of US$1586/oz in Ney York Comex trade in increased nevousness concerning the US debt ceiling talks, and Spainish and Italian debt woes.

“Gold will keep rising for the next five years, even if it has some crests and troughs,” Michael Widmer, an analyst at Bank of America-Merrill Lynch, said. “Those holding gold should hold on to it, while others should probably get their hands on it as it is going to be on an upward trend,”

"The rally is basically due to eurozone crisis. Gold priced in euro has hit a record. This says people in the eurozone have sold their euro holdings and converted it to gold. The other important factor is Federal Reserve's statements that hinted at a possible QE3. Silver will play a catch-up now. "Outlook is that prices could test $1,605 in the near-term or even higher to $1,645. Declines will get supported at $1,545-50 now." Says Gnanasekar Thiagarajan, director at Commtrensz Research.
Posted by Unknown at 8:57 AM No comments:

Gold is Money, and nothing else ~ JP Morgan to the US Congress in 1913

Posted by Unknown at 6:18 AM No comments: