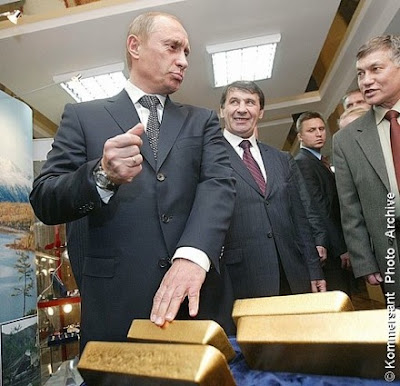 Russian Prime Minister Vladimir Putin accused the US of hooliganism on Monday over the US government's efforts to ease its financial problems by injecting hundreds of billions of dollars into the economy.

"Thank God, or unfortunately, we do not print a reserve currency but what are they doing? They are behaving like hooligans, switching on the printing press and tossing them around the whole world, forgetting their main obligations," Putin told a meeting of economic experts at the Russian Academy of Sciences.

Putin's comments came in the wake of the completion of the US' quantitative easing (QE) 2 program on June 30, in which the Federal Reserve bought $600 billion worth of its Treasury bonds. The Fed's first round of QE, which ended in March last year, amounted to less than half the size of QE2.

The Russian authorities have said they would like to see a basket of currencies including the ruble replacing the dollar as the main reserve currency, although most analysts have said a more realistic target for Russia would be if the ruble became a regional reserve currency for the CIS. 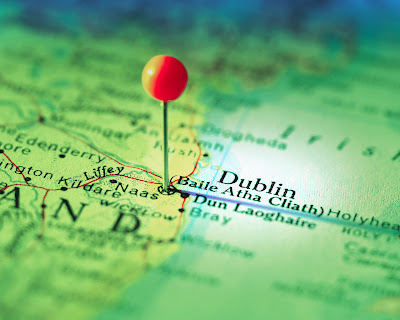 (Reuters) - Ireland's credit rating was cut to junk status by ratings agency Moody's which said the country will likely need further rounds of official financing before it can return to international capital markets.

Moody's cut Ireland's ratings by one notch to Ba1 from Baa3 and kept a negative outlook on the rating.

"It's amazing that Ireland was still investment grade, it seems like a lagged effect to me. Now that the market has made up its mind what sort of rating is appropriate for Ireland, the market hasn't been strictly paying attention to these downgrades. However, the market is reacting. Credit spreads are widening, and stocks and rates moving a little lower on this news and mortgage bonds are wider. It looks like risk appetite has come off, but the news itself shouldn't be a surprise to anyone. A lot of people assume that these rating agencies tend to move with a lag, so there could be more downgrades to come. Sometimes it triggers forced selling from funds that can only hold bonds with a certain rating."..........read on

Gold has moved higher in New York Globex trading after the FOMC minutes from last months meeting were released and they contained references to possible QE3 action. In the Euro zone the price for gold has just hit an all time high of 1120 euros/oz. 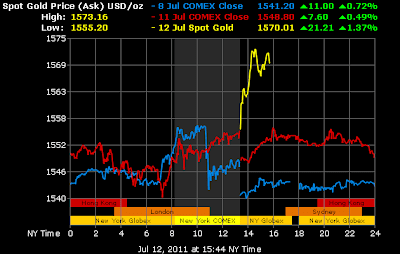 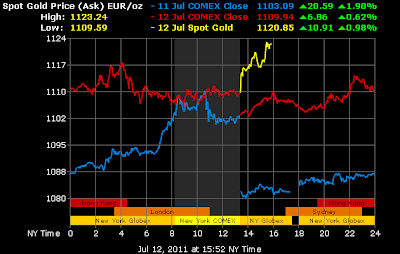 Posted by Unknown at 5:46 AM No comments:

I also wish to apologize on behalf of my friend who spent 18 months in Iraq leading up to Gulf War II looking for WMDs and didn't find any, he mustn't have been up to the task, sorry.

Posted by Unknown at 4:25 AM No comments:

Leaking Liberty: Assange back in court as Sweden plays to please US

The Value of Silver 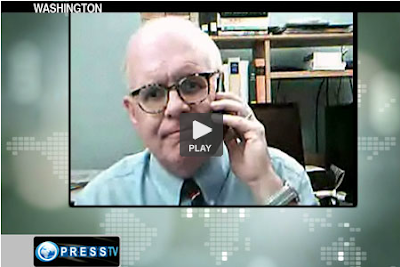 Russia's Foreign Minister Sergei Lavrov says the military conflict in Libya has reached a stalemate, and the human cost of the war in the troubled North African country is getting "high."
Lavrov also said there can be "no fast solution" to the NATO campaign in Libya.

Press TV talks with Dr. Webster Griffin Tarpley, an author and historian in Washington, about the recent developments in crisis-hit Libya.
Posted by Unknown at 2:05 AM No comments:

This week Max Keiser and co-host, Stacy Herbert, report on declaring war on rating agencies and buying refrigerators to save the economy. In the second half of the show, Max talks to Professor Emeritus, Guy McPherson, who has exited empire to build a post-carbon community.


While debt ceiling talks are underway on Capitol Hill, there is not a single word about employment, all while Friday's June job report shows the situation is deteriorating dramatically. Meanwhile the chairman of the President's Council on Jobs and Competitiveness, Jeff Immelt, is known for heading a company that famously paid no taxes last year and not only shed domestic jobs but added a staff overseas. Labor Journalist Mike Elk joins RT's Lauren Lyster in the studio to talk more about the issue.