The Fembots are coming

Reminds me of a former IT associate who had a Phd in Mathematics and who reasoned that he did not need a partner as he had the internet and a cat......

Keiser Report: The Vaporized & The Deleted

In this episode, Max Keiser and co-host, Stacy Herbert, discuss the vaporized and the deleted - the new American soap opera in which the assets, wealth, jobs and economy of the 99% have been stolen. In the second half of the show, Max talks to Daniel Collins of TheChinaMoneyReport.com about China's imports of gold and their recent purchases of Germany's legendary mittelstands.

Alex Jones - The monsters are on the loose

Alex Jones and Bob Chapman on Diminishment of Sovereignty

Inside Story - Will Israel attack Iran?

Jane's Defence: Israel ranks 6th with up to 300 nukes

Has the countdown to attack Iran begun already? Would Israel go it alone? And what would the regional implications be? Guests: Yaakov Katz, defence analyst and author; Mohammad Marandi, professor of political science at the University of Tehran.

Will Sweden extradite Julian Assange to the US?

I always wondered where the Bankster bailout money went

Weekend Chillout - Its all a Game

With all the talk of rigged markets, rigged stats and rigged voting this week, it makes me think at every game in town is rigged. And we all know what happens when a rigged game is exposed, it tends to end in tears.


Make a game | SilverDoctor Boot Camp | Free games | Pictogame
Posted by Unknown at 11:01 AM No comments:

A treasure hunter claims to have located the wreck of a bombed British merchant ship containing platinum bars worth $3billion.

If the theory is right, the ship, which was torpedoed by the Germans in World War II, could be one of the richest sunken treasure troves ever discovered.

Greg Brooks, of Sub Sea Research in Gorham, Maine, this week announced the wreck, sitting in 700 feet of water 50 miles off Cape Cod, Massachusetts, is that of the S.S. Port Nicholson.

Romanians stop paying benefits to anyone who owns gold 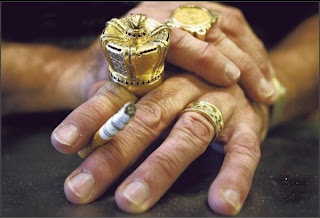 From the Daily Mail

Romanian officials have denied targeting gypsies under tough new laws introduced to cut back on the amount of benefits paid - by refusing to pay benefits to anyone who owns gold jewellery.

Under the regulations introduced by the Department for Work and Pensions, any person claiming any sort of social benefit will be excluded if they declare that they own jewellery, or have more than 100 grams of precious metal, works of art, porcelain or crystal objects, fur coats or designer products.

But officials are relying on people to volunteer the information about what they have at home meaning few are being excluded for their art collections - but in contrast gypsies who turn up with their traditional gold jewellery are being turned down.

Read more: http://www.dailymail.co.uk/news/article-2095114/Romanians-stop-paying-benefits-owns-gold-jewellery.html#ixzz1lSVxbwMf
Posted by Unknown at 10:39 AM 1 comment: