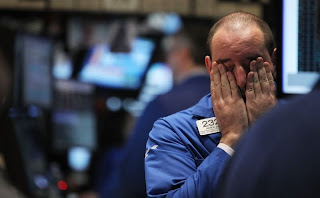 NEW YORK (Reuters) - A single trader alone could not have caused the "flash crash," a report by Instinet said on Monday, adding its voice to those casting doubt on a landmark regulator report that sought to explain the May market plunge.

The U.S. Commodity Futures Trading Commission and the Securities and Exchange Commission issued a September 30 report that said a $4.1 billion sale of E-mini futures contracts helped trigger the unprecedented, lightning-quick crash and recovery of May 6.

The 104-page report also concluded that high-frequency traders offsetting positions between futures and stocks, and a crush of orders to sell-at-any-price, helped exacerbate the liquidity crisis that afternoon.

Instinet, a brokerage and alternative trading venue operator owned by Nomura Holdings Inc, said the big sell order "could not be the singular cause" of the crash.....read on

A "Golden" Waterfall - Another of Natures Gifts 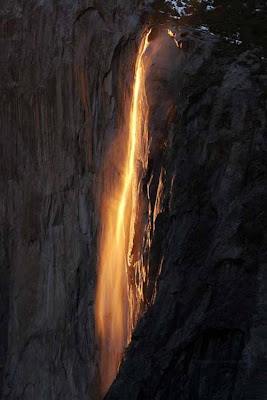 The spectacular view of the waterfall is created by the reflection of sunlight hitting the falling water at a specific angle. This rare sight can only be seen at a 2-week period towards the end of February. To photograph this rare event, photographers would often have to wait and endure years of patience in order to capture them. The reason is because its appearance depends on a few natural phenomena occurring at the same time...and some good luck.....to see more photos of this amazing waterfall click ---> here
Posted by Unknown at 12:56 PM No comments:

The War On Terror

Kabul in the Sixites and Today
The following article by Paul Craig Roberts paints a disturbing picture of the US and its dwindling allies mired in a war they cannot win and without end.
This is the same situation that President Nixon found himself in late 1971. The Vietnam War was dragging on without an end in sight, his party had come to power promising more social services, and he had become caught in a deficit spending trap. Unwilling to admit defeat in the war, unable to cut back on govt. social spending. The world could see the US was trapped and the value of US dollar started to sink as result. At the time the US$ was redeemable for gold (for international holders) at $35/oz and many countries, particually France rushed to convert their increasing worthless paper dollars into gold - the US literally had a run on its gold. As a result Nixon slammed the Gold Window shut on the world before the US Treasury's gold was completely exhausted.

Come forward to today. The US is in a war it can't win in Afghanistan that seems without end. As one commentator put it "Afghanistan, the place Empires go to die. The Greeks, The Mongols, The British, The Soviets and now the USA". Increasing burdens with Medicaid programs and the first wave of baby boomers retiring and drawing down on govt. backed but unfunded pensions has resulted in the US being trapped into ever increasing deficit spending. Sound familiar? What will the US default on this time, not its gold promise, but maybe its' foreign debt.

By Paul Craig Roberts: (former Assistant Secretary of the US Treasury and former associate editor of the Wall Street Journal)

Does anyone remember the "cakewalk war" that would last six weeks, cost $50 - 60 billion, and be paid for out of Iraqi oil revenues?

Does anyone remember that White House economist Lawrence Lindsey was fired by Dubya because Lindsey estimated that the Iraq war could cost as much as $200 billion?

Lindsey was fired for over-estimating the cost of a war that, according to Joseph Stiglitz and Linda Bilmes, has cost 15 times more than Lindsey estimated. And the US still has 50,000 troops in Iraq.

Does anyone remember that just prior to the US invasion of Iraq, the US government declared victory over the Taliban in Afghanistan?

Does anyone remember that the reason Dubya gave for invading Iraq was Saddam Hussein's weapons of mass destruction, weapons that the US government knew did not exist?

Are Americans aware that the same neoconservatives who made these fantastic mistakes, or told these fabulous lies, are still in control of the government in Washington?

The "war on terror" is now in its tenth year. What is it really all about?

The bottom line answer is that the "war on terror" is about creating real terrorists. The US government desperately needs real terrorists in order to justify its expansion of its wars against Muslim countries and to keep the American people sufficiently fearful that they continue to accept the police state that provides "security from terrorists," but not from the government that has discarded civil liberties.