Gerald discusses the Cyprus banking crisis. Listen to the KWN interview here
Posted by Unknown at 10:00 PM No comments: 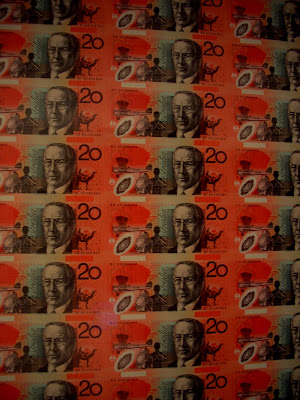 For those of you who don't know your blogger is a bullion dealer, amongst other business endeavours. On Friday I was selling bullion to a male client, mid 30's who I subsequently learnt had a supervisory position at his employer's company, so not a "dumb" or very young person. I asked him how he was going to pay for his purchase and he responded "cash". So I went about writing up his invoice for the purchase and when I presented the invoice to him to check and pay he handed me his plastic EFTPOS card (debit). I responded "Oh I thought you said you were paying cash sir?" His response stunned me (and unlike Norwegian blue parrots I don't stun easily). He said "Oh cash and EFTPOS are the same to me".

I started walking towards the ETPOS terminal with my client's card in my hand shaking my head thinking "gee I bet Cypriots don't think cash and EFTPOS are the same thing anymore." As the initial stunning wore off I felt I could not let such a comment stand and I started waving his plastic card at him saying "This is not cash! this a just bloody piece of plastic linked to a hard drive somewhere where a metal disc is spinning at 10,000 RPM and has part of its surface magnetically charged with positive and negative states!" "Cash is something that you can rub between your fingers, put in your pocket and buy stuff with when the banks are all god damn closed!" (and I wonder why I upset some people). His response was "Oh".

So this is how warped the world has become post the Cypriot banking crisis, someone like me, of all people, schooling clients on the merits of physical cash whilst selling them real money - silver. It is just wrong.
Posted by Unknown at 6:10 PM 1 comment: 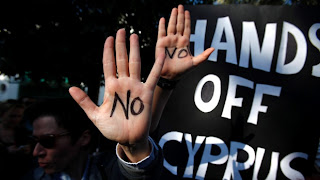 As civil society breaks down in Cyprus MPs have met to pass measures to help rescue their banking sector.

On civil society a friend of mine told me yesterday that a relative of her's has a modest holiday home in Cyrpus and has just be informed that it has been broken into. Although unlike a standard robbery not only did they take the TV, hi-fi, etc they also took all the fairly basic furniture, an old fridge, and every pot, pan, spoon, knife and fork in the house! - This is what society becomes without a functioning banking system, every physical item, regardless of what it is, can become a substitute currency, and remember this is country with still close and strong ties to the land and a large cash economy. Imagine what would occur in Sydney or London if the banks shut for a week!

Cyprus has approved nine measures hammered out in a desperate bid to raise the more than $7 billion required to unlock a bailout from the European Union.

Cyprus needs to come up with $7.74 billion by Monday or face cash flows to its banks being cut off.

Members of the Cypriot parliament gathered in the capital Nicosia, as hundreds of demonstrators faced off with riot police outside.

It is thought two key banks could be restructured under the move, while there will also be an emergency issue of bonds on state assets.

In a move bound to be met with anger by depositors, MPs also imposed controls to prevent a run on the island's troubled banks, which are due to open on Tuesday after a more than week-long break.

That measure restricts the movement of capital by, for example, setting withdrawal and transfer limits.

But with the clock ticking down to a crunch meeting with Eurozone finance ministers on Sunday, more contentious issues remain to be debated.

A fascinating interview with Professor Tom Levenson, the author of the book "Newton and Counterfeiter". Tom discusses Isaac Newton's time as the head of the Royal Mint, his introduction of the Gold Standard, the great recoining, as well as his scientific discoveries in general. A must listen for all Gold and Silver Bugs. The interview is conducted by the consummate science journalist and author, Robyn Williams. Listen to The Science Show interview here

For those new to The Science Show, Robyn Williams has hosted the show, which is broadcast every Saturday afternoon on ABC Radio National, since 1975 which has to be close to a world record for the one radio show with the same host for 38 years!
Posted by Unknown at 2:30 PM No comments:

I have a friend who is involved in amateur car racing. He has a 3D printer, which itself was printed from another 3D printer (sans circuit board). If he breaks any hard plastic part on his racing car he replaces it by printing the part out on his 3D printer. Also if any other any enthusiast has come up with a better design for a specific part he can upgrade his existing car parts - like installing a patch to an existing piece of software. For most metal parts he knows a guy with a computer controlled lathe which uses CAD files, again shared from other car owners, to make a one off part, and I imagine the same can be achieved with metal casting as well.

So just as file sharing helped break down the copyright cartels over music, film and text, 3D printing is poised to do the same for the world of patents.
From RTAmerica