Turkey’s trade balance may turn on whether President Barack Obama vetoes more stringent sanctions against Iran after the U.S. Senate passed a measure targeting loopholes in gold exports to the Islamic Republic.

Turkey’s gold trade with neighbouring Iran has helped shrink its trade deficit over the past year according to Bloomberg.

Incredibly, precious metals accounted for about half of the almost $21 billion decline.

That’s calmed investor concern over its current-account gap, and helped persuade Fitch Ratings to give Turkey its first investment-grade rating since 1994.

The U.S. Senate voted 94-0 on Nov. 30 to approve new sanctions against Iran, closing gaps from previous measures, including trade in precious metals. Obama, who opposes the move on the grounds it may undercut existing efforts to rein in the nation’s nuclear ambitions, signed an executive order in July restricting gold payments to Iranian state institutions.

Turkey exported $11.9 billion of gold in the first 10 months of the year, according to the Ankara-based statistics agency’s website.

A very large 85% of the shipments went to Iran and the United Arab Emirates.

Iran is buying the gold with payments Turkey makes for natural gas it purchases in liras, Turkish Deputy Prime Minister Ali Babacan told a parliamentary committee in Ankara on Nov. 23.

Iran provides Turkey with between 21% and 25% of its gas, data from the Energy Market Regulatory Authority and Energy Minister Taner Yildiz showed.

The current-account deficit may fall to $57.3 billion by year-end, according to a bi-weekly survey of economists by the central bank published on Dec. 6. That compares with $77.1 billion last year, when Turkey had the second-biggest deficit in the world, behind the U.S.

The U.S. and the European Union say Iran is secretly pursuing a nuclear weapons capability. Iran says its nuclear program is strictly for civilian energy and medical research.

The trade with Iran is a strategic necessity for Turkey, and the government will view any new U.S. sanctions according to its own interests, Prime Minister Recep Tayyip Erdogan said in Istanbul on Dec. 3. Turkey isn’t concerned with how it pays for the gas it buys from Iran and would pay in “potatoes” if necessary, Yildiz said two days later.

The proposed U.S. amendment introduced by senators Robert Menendez and Mark Kirk is confusing and inconsistent in applying sanctions, according to an e-mail from the White House on Nov. 29 that was obtained by Bloomberg News.

The Menendez-Kirk amendment would allow purchases of Iranian natural gas if payments are made in local currencies into an account that Iran could only use for approved trade.

The State Department said Dec. 7 that nine oil-importing nations, including Turkey, will continue to be exempt from the sanctions aimed at Iran, according to an e-mailed statement. A spokeswoman at the U.S. embassy in Ankara, who asked not to be identified in line with policy, declined to comment the next day.

The gold debate poses a dilemma for Turkey, and the nation’s finances may be affected by the outcome, according to Nilufer Sezgin, chief economist at Erste Securities in Istanbul.

The Turkey Iran gold for energy trade shows the benefits of gold.

While not a productive asset, it can create much employment, preserve wealth and has important monetary uses – especially in times of crisis.

Gold is becoming an essential means of payment again in the Middle East again. We expect to see this trend continue in the coming months as competitive currency devaluations are pursued by nations globally in order to prevent deep recessions and depression.

In time other large energy exporters such as Russia and Venezuela may take payment for their oil exports in gold.

Those continuing to simplistically call gold “a bubble” have yet to realise how gold is becoming money again.

As doubts grow about the euro, the dollar, the pound and fiat currencies internationally we expect currency devaluations and currency and gold wars to intensify.

Gold is going from a fringe investment asset to a mainstream store of wealth held by prudent individuals, institutions, banks and nations.

Read report in full here
Posted by Unknown at 2:25 PM No comments:

Capital Account - Jim Rickards: the Fed is Racing to Create Inflation Before the US Economy Implodes!

"In an unsterilized world, silver disinfects"
~ Tears
Posted by Unknown at 9:05 AM No comments: 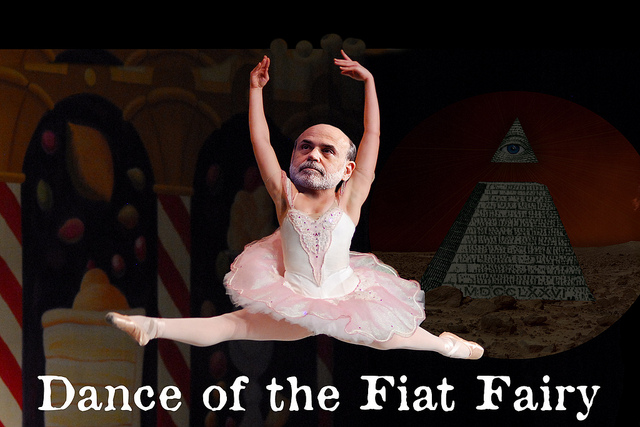 It seems Uncle Ben has finally grown some cojones and embarked on some manly fiat currency creation with $45 Billion per month of unsterilized bond purchases.

My thanks to The Doc from silverdoctors.com for this excellent summary of the Fed announcement whilst I was asleep:


Press release from the FOMC

Information received since the Federal Open Market Committee met in October suggests that economic activity and employment have continued to expand at a moderate pace in recent months, apart from weather-related disruptions. Although the unemployment rate has declined somewhat since the summer, it remains elevated. Household spending has continued to advance, and the housing sector has shown further signs of improvement, but growth in business fixed investment has slowed. Inflation has been running somewhat below the Committee’s longer-run objective, apart from temporary variations that largely reflect fluctuations in energy prices. Longer-term inflation expectations have remained stable.

Consistent with its statutory mandate, the Committee seeks to foster maximum employment and price stability. The Committee remains concerned that, without sufficient policy accommodation, economic growth might not be strong enough to generate sustained improvement in labor market conditions. Furthermore, strains in global financial markets continue to pose significant downside risks to the economic outlook. The Committee also anticipates that inflation over the medium term likely will run at or below its 2 percent objective.

To support a stronger economic recovery and to help ensure that inflation, over time, is at the rate most consistent with its dual mandate, the Committee will continue purchasing additional agency mortgage-backed securities at a pace of $40 billion per month. The Committee also will purchase longer-term Treasury securities after its program to extend the average maturity of its holdings of Treasury securities is completed at the end of the year, initially at a pace of $45 billion per month. The Committee is maintaining its existing policy of reinvesting principal payments from its holdings of agency debt and agency mortgage-backed securities in agency mortgage-backed securities and, in January, will resume rolling over maturing Treasury securities at auction. Taken together, these actions should maintain downward pressure on longer-term interest rates, support mortgage markets, and help to make broader financial conditions more accommodative.

The Committee will closely monitor incoming information on economic and financial developments in coming months. If the outlook for the labor market does not improve substantially, the Committee will continue its purchases of Treasury and agency mortgage-backed securities, and employ its other policy tools as appropriate, until such improvement is achieved in a context of price stability. In determining the size, pace, and composition of its asset purchases, the Committee will, as always, take appropriate account of the likely efficacy and costs of such purchases.

To support continued progress toward maximum employment and price stability, the Committee expects that a highly accommodative stance of monetary policy will remain appropriate for a considerable time after the asset purchase program ends and the economic recovery strengthens. In particular, the Committee decided to keep the target range for the federal funds rate at 0 to 1/4 percent and currently anticipates that this exceptionally low range for the federal funds rate will be appropriate at least as long as the unemployment rate remains above 6-1/2 percent, inflation between one and two years ahead is projected to be no more than a half percentage point above the Committee’s 2 percent longer-run goal, and longer-term inflation expectations continue to be well anchored. The Committee views these thresholds as consistent with its earlier date-based guidance. In determining how long to maintain a highly accommodative stance of monetary policy, the Committee will also consider other information, including additional measures of labor market conditions, indicators of inflation pressures and inflation expectations, and readings on financial developments. When the Committee decides to begin to remove policy accommodation, it will take a balanced approach consistent with its longer-run goals of maximum employment and inflation of 2 percent.

Gold and Silver responded in the following manner: 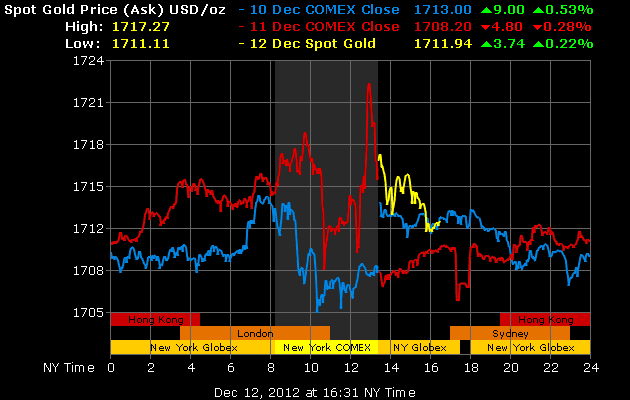 Posted by Unknown at 9:02 AM No comments: