Your blogger with Egon at the Gold Symposium Sydney 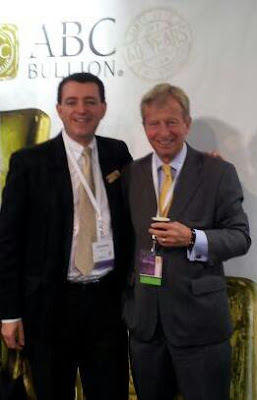 Germany to Assay and Repatriate its Gold Reserves

If Germany has unease about its Gold Reserves, why not Australia? Why do we store our nation's gold in that dubious little offshore island called Great Britain?

BERLIN — Germany's central bank has failed to properly oversee the country's massive gold reserves, which have been stored abroad since the Cold War in case of a Soviet invasion, independent auditors say.

The central bank must renegotiate its contracts to gain the right to inspect its gold bars, which are worth tens of billions of dollars and are stored in the United States, Britain and France, the Federal Auditors' Office said in a report to lawmakers obtained by The Associated Press on Monday.

The report says the gold bars "have never been physically checked by the Bundesbank itself or other independent auditors regarding their authenticity or weight." Instead, it relies on a "written confirmations by the storage sites."

......Given the growing political unease about the issue and the pressure from auditors, the central bank decided last month to repatriate some 50 tons of gold in each of the three coming years from New York to its headquarters in Frankfurt for "thorough examinations" regarding weight and quality, the report revealed.

Read in full
Posted by Unknown at 7:18 AM No comments: