Max and Stacy report from New York this week on the news and discuss backwardation of Gold and Silver. Listen/download here
Posted by Unknown at 7:50 PM No comments:

Jim Sinclair on volatility of $5000 Gold 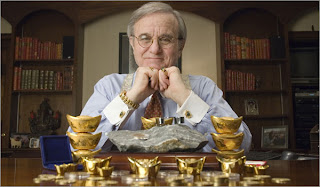 Keiser Report: Who stole from you? A Robo-banker


In this episode of the Keiser Report, Max Keiser and Stacy Herbert discuss the annoying human qualities like hunger, fear, love, lust, desire and need that get in the way of maximum GDP growth. Replacing humans with non-suicidal robots would get rid of environmental concerns as well as all these GDP busing pesky human problems like hunger and fear, but would the courts be even able to look at the algorithm of should the robot turn killer? They also discuss a robo-pope as the first truly infallible one. In the second half of the show, Max Keiser talks to author, comedian and gold bug, Dominic Frisby, about death crosses and gold prices and about the independent currencies whether the Keiser dollar, the Frisby pound or bitcoin.

Alasdair Macleod: Europe is in Worse Shape Than Everyone Thinks