US puts gun to own head

Japan to restrict power use by 25% 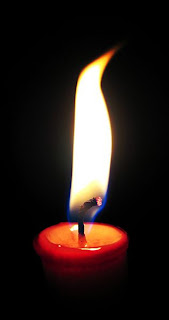 Japan announced power reduction targets for Tokyo and north Japan that will require big manufacturers and other large-scale users to cut peak summer consumption by one-fourth as it vowed to avoid rolling blackouts that could hobble the economy.

The government estimates that, with a particularly hot summer like last year's, peak power production could fall short of demand by as much as 18,300 MW in the two utilities' service area -- or about one-fourth of total demand -- after a massive March 11 quake and tsunami shut down several big nuclear and thermal power stations.

With the reductions, to be implemented from July to September, the Tokyo area and northern Japan would in principle be able to avoid rolling blackouts, Trade Minister Banri Kaieda told a news conference, although that option would be held in reserve as a last resort to forestall an unexpected blackout for the entire service area if demand threatens to surpass supply.

Tokyo Electric imposed rolling blackouts last month after the quake, which took out 23 percent of its generating capacity. The blackouts dealt a severe blow to activity in a region that generates 40 percent of GDP in the world's third-largest economy.......read on

With WTI Crude Oil over US$110 I thought I would dedicate this weekend's chillout to those innocent times when you could go for a drive just for something to do without ever thinking how much the fuel you were using was costing. Also it gave me the excuse to include my favourite Kiwi singer, Bic Runga.

Silver Blasts through the US$40 barrier 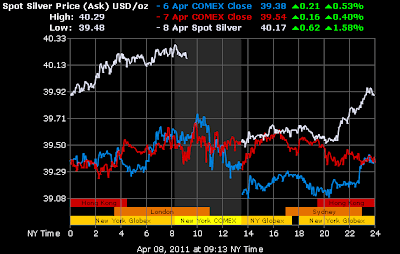 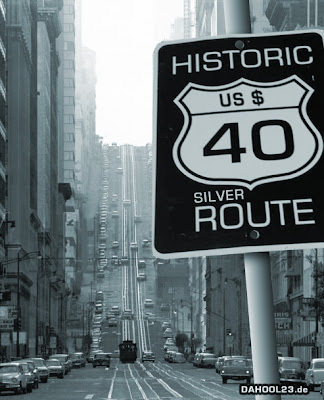 This week Max Keiser and co-host, Stacy Herbert, report on the Class A backing both the Triple A rated and the A listed. In the second half of the show, Max talks to James Howard Kunstler about entropy made visible and a return to the medieval.

Silver Investment the Dominant Driver of a Remarkable 2010

From The Silver Institute:

(NEW YORK – April 7, 2011) Booming silver investment was the primary source of the astounding 78 percent intra-year increase in silver prices in 2010. A sturdy rebound in total fabrication demand, led by the industrial sector, was also significant, according to World Silver Survey 2011, released today by the Silver Institute.

Exchange traded funds (ETFs) registered another sterling performance in 2010, with global ETF holdings reaching an impressive 582.6 Moz, representing an increase of 114.9 Moz over the total in 2009. The iShares Silver Trust accounted for almost 40 percent of the increase, with other notable gains achieved by Zurcher Kantonalbank, ETF Securities, and the Sprott Physical Silver Trust.

A significant boost in retail silver investment demand paved the way for higher investment in both physical bullion bars and in coins and medals in 2010. Physical bullion bars accounted for 55.6 Moz of the world investment total last year. Coins and medals fabrication rose by 28 percent to post a new record of 101.3 Moz. In the United States, over 34.6 million U.S. Silver Eagle coins were minted, smashing the previous record set in 2009 at almost 29 million. Other key silver bullion coins reaching milestones include the Australian Kookaburra, the Austrian Philharmoniker, and the Canadian Maple Leaf–all three posting record highs in 2010.

Increasing a hefty 47 percent last year to 178.0 Moz, implied net silver investment recorded its all-time high. Much of the increase was due to ETFs, the over-the-counter market, and investment in physical bars.

Total fabrication demand grew by 12.8 percent to a 10-year high of 878.8 Moz in 2010; this surge was led by the industrial demand category. Last year, silver’s use in industrial applications grew by 20.7 percent to 487.4 Moz, nearly recovering all the recession-induced losses in 2009, and is now seeing pronounced advances in 2011. Jewelry posted a gain of 5.1 percent, the first substantial rise since 2003, primarily due to strong GDP gains in emerging markets and the industrialized world’s improving economic picture. Photography fell by 6.6 Moz, realizing its smallest loss in nine years, as medical centers deferred conversion to digital systems. Silverware demand fell to 50.3 Moz from 58.2 Moz in 2009, essentially due to lower demand in India........read in full
Posted by Unknown at 10:45 AM 1 comment: