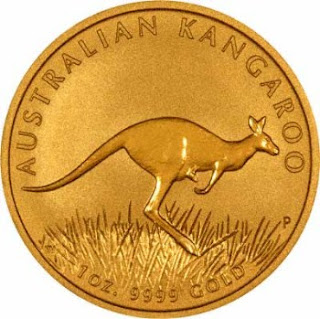 In what sort of world does a commodity's demand increase by 41%, but its price decline by 28%? Silly me, that's right a manipulated world.

Gold sales from Australia’s Perth Mint, which refines most of the bullion from the second-biggest producer, climbed 41 percent last year as bullion capped the worst annual loss in more than three decades.

Read more
Posted by Unknown at 5:53 AM No comments:

Mate when gold peaked in 1980 it was because a few US traders wet themselves when the USSR invaded Afghanistan. Gold is now being brought by people in the most populous countries in the world, not just the relative few in the US and Europe as was the case in the late 70s.

In this episode of the Keiser Report, Max Keiser and Stacy Herbert discuss the scary banking clowns, the alleged decline in bank robberies and the Times' 'Briton of the Year,' George Osborne causing a nation of a million mortgage holders in 'perilous debt.' In the second half, Max interviews Danny Blanchflower, a former external member of the Bank of England's interest rate-setting Monetary Policy Committee, about the disastrous UK economy, George Osborne's policies and the BoE decision to buy UK Gilts rather than other assets during this crisis.

Posted by Unknown at 3:55 AM No comments:

Whilst there maybe 300 Million people in the US hanging on every word of The Fed, the rest of us 6.7 Billion people really couldn't give a @$@%#^$ about The Fed and buy gold because the Earth has very little of it and isn't making anymore of it.
Posted by Unknown at 3:22 AM No comments: