While the US finds itself in danger of a credit ratings downgrade due to a national debt crisis, a number of European countries have seen their status fall even further.

Stand & Poor's, Moody's and Fitch - the three largest US-based credit rating agencies - have been criticised by European policymakers who say they have been too quick to downgrade indebted EU states during the euro zone debt crisis.

Rainer Bruederle, the head of German Chancellor Angela Merkel's coalition partners in parliament, has put forward a proposal on Friday to to launch a privately funded, independent European agency to break the dominance of the three main US houses, according to Handelsblatt, a German newspaper.

"Trust in the statements of the opinion-oligopoly of the three largest U.S. agencies is one of the reasons that risks in financial markets became known too late," the business daily quoted him as saying.

This weeks posts seem to be dominated sadly by fear,hate and war - something the band The Byrds tried to teach us about in 1965.

A time of love, a time of hate
A time of war, a time of peace
A time you may embrace, a time to refrain from embracing

Does the eurozone need to promote more fiscal responsibility? Is Italy too big to fail? Can the EU afford a Greek default? And isn't it already bankrupt? Can new institutions and profound restructuring save the currency? CrossTalking with Scheherazade Rehman, Jim Rogers and Dennis Gartman.

Posted by Unknown at 9:32 AM No comments:

Gold climbed for a ninth straight day amid concern the U.S. is getting closer to losing its top credit rating. Oil rallied, extending a third consecutive weekly advance, and the Standard & Poor’s 500 Index rose amid gains in energy and technology shares.

U.S. House Republicans plan a vote next week on a measure to cut spending, cap expenditures and condition a $2.4 trillion increase in the debt ceiling on passage of a constitutional amendment to balance the budget. While the plan may pass in the Republican-led House, it won’t in the Democratic-controlled Senate, said Representative Steny Hoyer of Maryland, the House’s No. 2 Democrat. The vote offers no immediate resolution to talks aimed at reaching a deal by an Aug. 2 deadline........read on

Bernanke - 'US default would be disastrous' 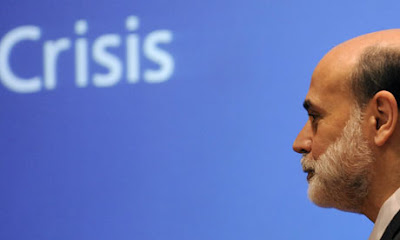 The US central bank chief has said that a debt default would be a disastrous 'self-inflicted wound' and that lawmakers must heed the downgrade warnings of ratings agencies.

Federal Reserve chairman Ben Bernanke warned the protracted battle in Congress over raising the debt ceiling, less than three weeks before the country's spending commitments could force it into default, was endangering its top-rated credit reputation.

'This is a tremendous asset of the United States - the quality and reputation of our Treasury securities - and we benefit from it with low interest rates,' he said in semi-annual testimony to Congress.

Ratings agency Standard & Poor's warned US lawmakers privately that it would downgrade the country's debt if the Treasury Department is forced to prioritise payments because Congress does not raise the debt limit, a congressional aide told Reuters news agency.

The warning undercuts an argument made by some Republicans that the country's credit rating would not be affected as long as the Treasury Department made debt service a priority over other obligations.