In this episode, Max Keiser and Stacy Herbert discuss the newly knighted, Sir Hector Sants, the catastrophic ambition of global bank fraud and the merger of the police state and the banks in the suppression of Occupy Wall Street. In the second half of the show, Max Keiser talks to 'the Thomas Jefferson of the internet,' John Perry Barlow about his new website, pressfreedomfoundation.org, started with John Cusack and Daniel Ellsberg and dedicated to circumventing financial blockades and, thus, enabling donations to such groups as WikiLeaks and others dedicated to transparency and journalism. 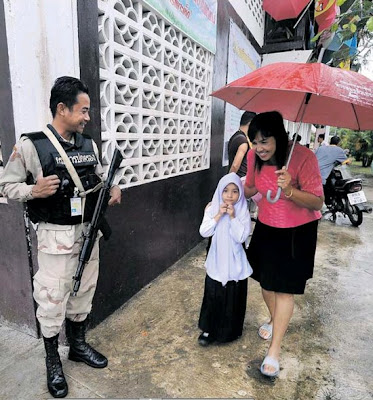 In stark contrast to the politically correct USA, the Thai government is taking steps to protect teachers in their Southern most provinces from being shot by terrorists and criminals:

The bravery and dedication of teachers in the strife-torn southern provinces serves as a great inspiration to society. Despite the near-daily insurgent attacks, teachers in Yala, Narathiwat, and Pattani perform their duties undaunted.

About 20,000 teachers in the deep South go to school every morning without knowing whether they will be able to return home safely in the evening.

The Education Ministry will propose that bulletproof vests be given to teachers working in violence-plagued parts of the far South, Deputy Education Minister Sermsak Pongpanit said yesterday.

Mr Sermsak said the bulletproof vest idea could help save lives as teachers have come under frequent attack from suspected insurgents recently. Priority would be given to areas considered most dangerous for teachers to live or work in, he said.

Mr Sermsak added that each of the three southernmost provinces had been granted the authority to consider issuing gun licences to teachers so that they may legally carry them in public.

The strengthened security measures have improved morale among southern teachers, Mr Sermsak said.
Posted by Unknown at 9:33 PM No comments:

Truck carrying Silver crashes in US

Just as well the truck wasn't carrying silver future contracts as they would have gotten wet or blown away, drop a 1000oz silver bar and it doesn't go anywhere, well not without a lot of help :-)

John Embry on the Gold and Silver Markets in 2013

John Embry discusses the factors weighing on the Gold and Silver markets in 2013, he also discusses the rarity of Silver. Listen to the KWN interview here
Posted by Unknown at 5:48 AM No comments: