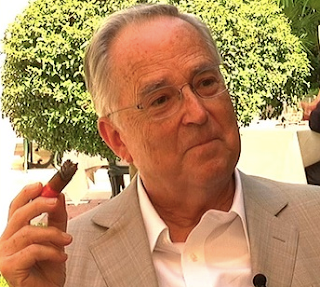 On the website wikipedia.org, under PSYOPS, the abbreviation used for “Psychological Operations” in government circles, we find:

“PSYOPS
“[….]Various techniques are used, by any set of groups, and aimed to influence a target audience's value systems, belief systems, emotions, motives, reasoning, or behavior.”

This definition of PSYOPS – “psychological operations” - applies to the events of Friday, April 12 and Monday, April 15, 2013, which were preceded by years of preparation before the knock-out blows of those days. The prolonged and unceasing war on gold took the quoted price of gold down from $1895 in early September, 2011, to $1380 as of this date; a fall of 27%. .

Following the wikipedia.org definition, the Psyops war on gold is intended to influence the target audience’s value system, belief system, emotions, motives, reasoning and behavior. I would add, especially this last, which is what directly affects the price of gold.

The latest stage of the war began many weeks ago, with regular take-downs of the price of gold in waterfall fashion, at set times of the day.

More recently, there appeared a series of planned announcements of oncoming doom from individuals prominent in finance and from bank analysts. The scenario painted for gold was one of a sky darkened by approaching thunderstorms.

The identity of the target audience of the Psyops War on Gold is clearly revealed in the front-page article of the “Financial Times”, American edition, on Tuesday April 16, 2013.

Under the main headline, “Investors in rush to dump gold” is a graph of the performance of the gold price from January 3, 2011 to date, showing essentially no gain at all.

This is a classic example of PSYOPS.

It was most certainly not “investors” who caused the huge, historic collapse in the price of gold. It was a very few banks, working in cooperation with each other, in a pre-planned fashion. They sold, in huge amounts of tens of billions of dollars, not physical gold, but futures contracts – the infamous “paper gold”. It was the banks who rushed to “dump” the gold and not investors.

A News Agency report published on April 16 informs that Carsten Fritsch, commodities analyst for Commerzbank AG, Germany, says that on Friday, April 12, futures for more than 1,100 tonnes of gold were sold.

That amount of futures is equivalent to about 45% of world gold production.

It is completely impossible that investors in gold should decide to short such an immense quantity on the same day. The 4-12 operation was a deliberate bomb on the market, cast by the too-big-to-fail (or prosecute) banks, colluded with the Fed and no doubt, the Federal Government. The policy is: if the market is against your policy, bomb the market.

The intention of the 4-12 operation was to make gold investors think that their judgment regarding gold as a refuge for savings was mistaken, and to change their behavior accordingly: shun gold purchases.

Lying is a necessary part of PSYOPS, and so the collapse in price was not laid at the door of the colluded banks, but attributed to investors, because these are the “target audience” mentioned in the Wikipedia.org article. The PSYOPS told the investors that they, the investors, were panicking and dumping gold.

By identifying the “target audience” in the case of 4-12 as investors in gold we can detect the reason for the PSYOPS:

Investors around the world during the past months were approaching a condition of panic regarding the whole financial system of the world, and there was a danger of a sudden flight into the age-old refuge of owning physical gold. The events in Cyprus, where depositors in banks lost substantial parts of their funds, were very unsettling; and especially unsettling was the remark by the Dutchman “Mr. Diesel-boom” who said that this operation was a “template” for action in the case of problem banks in the rest of Europe. And if Europe was to suffer this, would American depositors in banks be far behind?

4-12 has achieved its purpose: it averted the stampede into gold – for the time being. But humans are not cattle which stampede due to a sudden fright – say, a startling gunshot - which quickly passes. The fright of humanity is caused by the immense financial fiasco involving the whole world’s finances and economies, and it is not a passing fright; it remains in place because the frightful conditions have not disappeared, but are increasing day by day.

American investors are fairly easy marks for the 4-12 PSYOPS. It is likely that many have not really grasped the importance of possession of gold; the American experience with gold during the past hundred years has been slight. For many years Americans were forbidden by Law to invest in gold. The prevailing mind-set is still: Stocks and Bonds. The average American investor in gold is a neophyte, and by holding gold acts against the opinions of the majority of his fellows. As de Tocqueville noted in his book “Democracy in America”, Americans have a deep-seated need to think alike. So perhaps a significant number of American investors in gold can be frightened into giving up on gold-investing.

The rest of the world is a different story. We have the governments of Russia and China who are oriented to gold through a long history of financial calamities unknown to Americans. India will be purchasing cheap gold hand over fist in the coming days; for Indians, gold is an essential element of their psyche. The Middle East - Semitic nations - and the Far East will also feast upon the low price of gold, for which they have an inborn affinity.

Investors facing financial and economic reality around the world will soon erase the effects of 4-12. Western gold investors who may succumb to 4-12 PSYOPS will soon regret their weakness.
Posted by Unknown at 9:31 PM No comments:

In the documentary "The Secret World of Gold", my favourite bankster apologist Jeff Christian says he believes Fort Knox contains all the gold the sweet smelling US government say it does. Even though there has not been a complete physical audit and assay of the gold there since 1956. To Eric Sprott's credit he doubts the gold is all there and definitely not in good delivery form, ie trade able. I leave you to make up your own mind which is more creditable after reading the following article.

Thanks to The Doc at silverdoctors.com for publishing the following Globe article from 1981 throwing light on the Fort Knox gold and the mysterious 300 trucks. 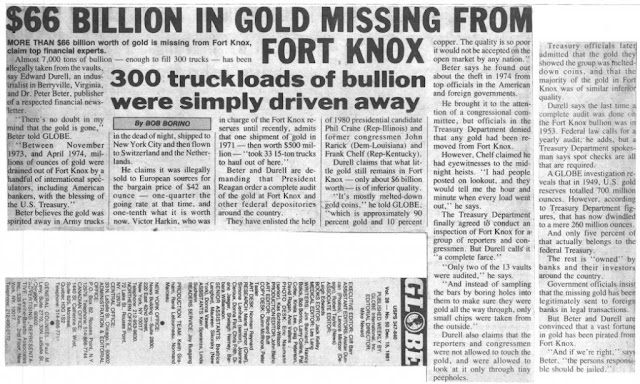 The Secret World Of Gold


I thought in light of subjects brought up in this documentary it would be worthy to re-post the following Keiser Report.