Spanish village returns to old money instead of the Euro 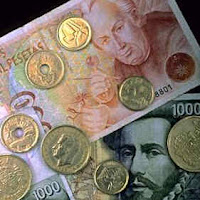 A Spanish town is looking to the past to safeguard the future of its ailing economy by reintroducing the peseta.

Fed up with the failing euro, rebellious locals in Villamayor de Santiago have reverted to using the old currency, which was phased out a decade ago.

News quickly spread, and shoppers from neighbouring villages and towns have been flocking there to spend the old currency.

Luis Miguel Campayo, chairman of the local merchants’ association, who came up with the idea, said: ‘People kept hold of old pesetas thinking that they might come in handy one day if the euro fails.

Around 30 shops in the historic town, 75 miles south-east of Madrid, started accepting pesetas last month after urging customers to dig out any old notes and coins they had forgotten about.