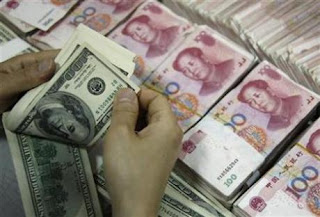 China’s foreign-exchange reserves climbed by a record in the fourth quarter and lending exceeded the government’s full-year target, increasing pressure on the central bank to tighten policies to rein in liquidity and inflation.

The currency holdings, reported by the central bank on its website today, increased by $199 billion in the last three months of 2010 to $2.85 trillion, the biggest quarterly gain since Bloomberg data began in 1996. Full-year yuan-denominated lending of 7.95 trillion yuan ($1.2 trillion) compared with a government target of 7.5 trillion yuan.

The central bank may need to raise benchmark interest rates and bank reserve requirements, and allow faster yuan appreciation, economists from Standard Chartered Plc and Credit Agricole CIB said. Policy makers may also experiment with more ways of encouraging outflows of capital, after expanding a program for exporters to park revenue overseas and letting some citizens invest directly abroad.....read on