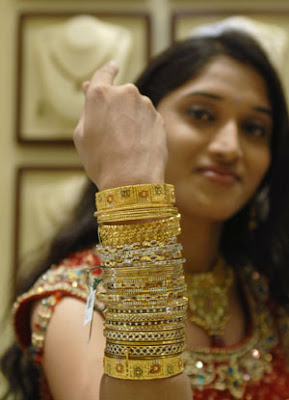 What planet do these guys live on? A bloated banker in Mumbai is telling millions Indian women in villages across the country not to save in gold but instead in paper denominated in a fast depreciating fiat currency - do think they are going to listen? Bet he didn't have the cojones to tell his wife to stop buying gold for their daughter's wedding, etc.

From The Economic Times

"I think the RBI has advised banks they should not sell gold coins," he said at the AGM of the Indian Banks' Association (IBA) here today.

This is in addition to RBI's restrictions on gold imports by banks and other agencies. Banks have also been advised to restrict advances against gold coins.

Both the government as well as the Reserve Bank have been taking steps to curb the gold imports, which have averaged 152 tonnes in April and May, resulting in foreign exchange outgo of about USD 15 billion. The average monthly gold import was 70 tonnes in the last fiscal.

Last night the import duty on gold was increased to 8 per cent from 6 per cent, the second increase within six months.

Chidambaram said the surging imports are unsustainable and advised the banks to tell customers not to invest in the precious metal.

"Banks have a role to play in dampening the enthusiasm for gold... I would urge all banks to please advise their branches that they should not encourage their customers to invest in or buy gold," he said.